HomeAcademicAcademic NewsHolding The third consultation meeting of the officials and teachers of Tebyan... 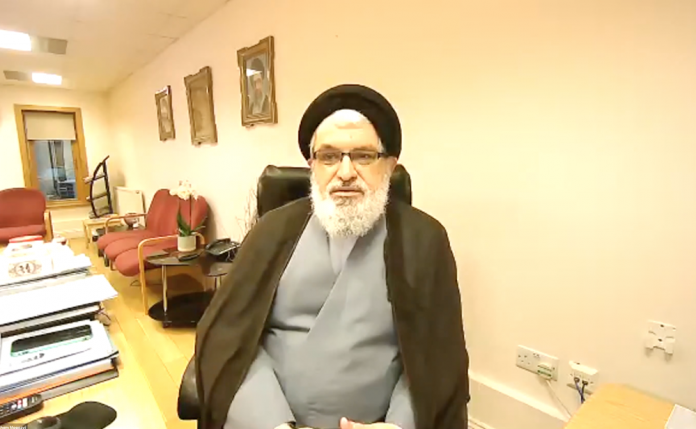 Our God!  Encourage a prophet from among them to recite your verses to them, to teach them the Book and Wisdom, and to purify them.  In fact, you are only capable and omnipotent.  »[2: 129]

The third consultation meeting of the officials and teachers of Tebyan School was held virtually in Zoom Network in the presence of HIWM Seyed Hashem Moosavi, the Director of the Islamic Centre of England on Wednesday 10th March 2021 at 4 p.m. and on the glorious occasion of Eid al-Mabath.

At the beginning of the meeting, one of the teachers of Tebyan School, Mr. Ala Al-Zubaidi, recited a few verses from the Holy Quran.

He also presented a report on school activities.

Deputy Director of the Academic Affairs was the next speaker at the meeting. He talked about the subject of “ Educating Children, Why & How”  by using the PowerPoint he had prepared.

In the final part of the program, HIWM Seyed Hashem Moosavi thanked all the staff and teachers of the Tebyan school and congratulated them on Eid al-Mabath.

He also mentioned the issue of education and training upbringing of the children of the Islamic society as one of the most important issues and emphasized on making more efforts in this regard.

HIWM Seyed Moosavi mentioned the education and work of teachers as the goals of the prophets. He also In his speech, he praised the efforts of the teachers of Tebyan School in the previous training course, which was done through virtual.