The ceremony of the birthday of the only savior of the human beings with the title of “the characteristics of Imam Asr’s companions (May Almighty God hasten his advent)” was held in different languages last evening on the virtual networks of the Islamic Center of England.

Through the panel of this virtual celebration, in which Shiite youth from different British cities took an active part, Hujjat-ul-Islam Wal Muslimin, Moosavi, the representative of the Supreme Leader of Iran in England, distinguished the between the conditions (preliminaries) and signs of the advent of Imam Asr. 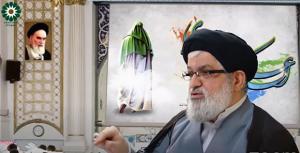 It must necessarily be provided before the advent. In contrast, the signs of the advent are merely signs in which the believers have neither a role nor a duty, and according to some narrations, most of the signs will occur simultaneously at the time of advent or after it. To this end, some Islamic scholars use the term the signs of uprising instead of the signs of advent. The Director of the Islamic Centre of England said that Ahadith narrated by the Infallibles (peace be upon them), the characteristics of the companions of Imam Asr (May Almighty God hasten his advent) can be enumerated as follows: Faithful, self-sacrificing people, ready to defend the Infallible Imam (peace be upon him) and those who do not infer (Ijtihad) against the explicit words of the Imam.

Hujjat-ul-Islam Wal Muslimin, Moosavi also mentioned the public readiness as one of the conditions for the emergence of Imam Asr and added that people should reach a level of awareness that was waiting for the uprising of Imam Asr and to announce their cooperation in achieving his goals and plans, as happened in the establishment of the Islamic government by the Holy Prophet of Islam (Peace and Blessings of God be upon him) in Medina.

The Supreme Leader’s representative in Britain, referring to examples of unpreparedness of the people throughout the of Islam, said that the people’s lack of association with the Infallible Imam led to the martyrdom of the Infallible Imams (peace be upon them) in some cases. The Director of the Islamic Center, referring to the existence of injustice in the shadow of the capitalist system and the power-seeking of owners of power, which has caused an astronomical social class gap between the capitalist and the poor, said: One of the real waiting person’s tasks is to inform the people of the world about the existence of such a divine reserve so that, under the leadership of that dear Imam, hope can once more be revived in the hearts of the oppressed of the world.

The Director of the Islamic Center of England said that there are many narrations from the infallible (peace be upon them) that news of the emergence of public uprisings on the eve of his advent. In some of these narrations, it is indicated that a government will be established under a moral leadership in the East of the world, which will be continued until Hadrat Mahdi’s (peace be upon him) advent.

Some contemporary scholars believe that this uprising is the Islamic Revolution of Iran, which, God willing, will formulate the basis for the emergence of the awaited Imam(peace be upon him). The Director of the Islamic Center of England also said that one of the other conditions for the advent was the of the earth with oppression and corruption, and added that some narrations mentioned that Hazrat Mahdi (peace be upon him) will extend justice through the world after it was filled with oppression.

Hujjat-ul-Islam Wal Muslimin, Moosavi said: “We believe that the world with oppression will be a sign and not a condition because if it is a condition, we should try to fulfill this condition, that is, we should help increase corruption and oppression so that the Imam Asr (Imam of the Age) will make his advent sooner, whereas most Shiite scholars opposed this thought.”According to the Supreme Leader’s representative in Britain, Shiite scholars indicate that the world is full of oppression and corruption at the time of its advent does not mean that we have to provide this condition ourselves.

Still, these events will be happened by force. But the believers must protect themselves from corruption despite the corruption that is spreading day by day in the world and prepare the human community to help the Imam (peace be upon him). That is why we observe that none of the divine duties and obligations are abrogated in the period of absence. In this ceremony, before the speech of the President of the Islamic Center of England, the participating youth discussed and exchanged views on the characteristics of Imam Asr’s companions.

Playing exciting and new videos of Imam Mahdi’s waiters was one of this ceremony’s programs. The celebration of Imam Zaman’s (May Almighty God hasten his advent) was also broadcast in Arabic and Urdu today after the ceremony on the virtual networks of the Islamic Center of England and Ahlul Bayt TV.

Likewise, the ceremony of this auspicious celebration will be broadcast tomorrow evening. After the ceremony, Sheikh Rashad Ansari celebrated Imam Zaman’s birthday in the Arabic language. In another ceremony, Hujjat-ul-Islam Wal Muslimin, Seyed Abbas Abedi and also gave a lecture on the characteristics of  Imam Asr’s (peace be upon him) companions in the Urdu language.

The ceremony of the birthday of the only savior of the human beings with the title of “the characteristics of Imam Asr’s companions (May Almighty God hasten his advent)” was held in Farsi languages this evening on the virtual networks of the Islamic Center of England.