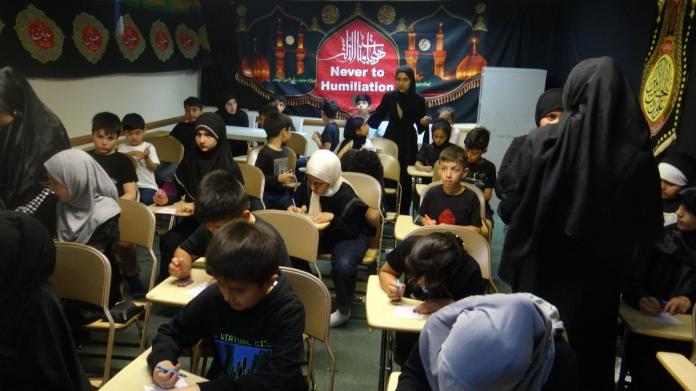 This year the Islamic Centre of England’s education department welcomed a large number of children and youth to a parallel programme held to commemorate the first ten days of Muharram. Its aim was primarily to educate rather than only mourn in order for the youngsters to learn lessons from the lives of Imam Husayn (a) and his companions.
Over 100 children attended aged between 6 and 12 years with the aim of learning about Islamic practices as well as the uprising of Imam Husayn (a) and his loyal companions. Various muharram themed activities took place which included drawing, painting and face painting, as well as playing muharram video clips. Theatrical performances and storytelling creatively narrated the incident of Karbala. Recitals were held in the classes and included lamentations, calls to prayer as well as salutations upon the Prophet (sawa).

The youth theatre group also made a heart rendering performance on the nights attributed to the brave youth hazrat Qasim and Imam Husayn (a)’s six-month-old infant hazrat Ali Asghar (upon them be peace). Dressed in traditional costumes and holding flowers and candles, they walked through the audience in both the arabic and farsi programmes in order to further stir the grief-stricken hearts and increase the mournful atmosphere.

These educational classes were held for ten nights commencing Friday the 29th of July 2022 until the Day of Ashura on the 8th of August 2022 parallel to the arabic, farsi and urdu programmes held elsewhere in the centre. Four classrooms facilitated two age groups of girls and boys from 7.30 pm until the call to maghrib prayer, and then recommenced again after maghrib prayer until about 10.30pm.