HomeNewsSpecial NewsThe mourning ceremony held at the Islamic Centre of England marking the... 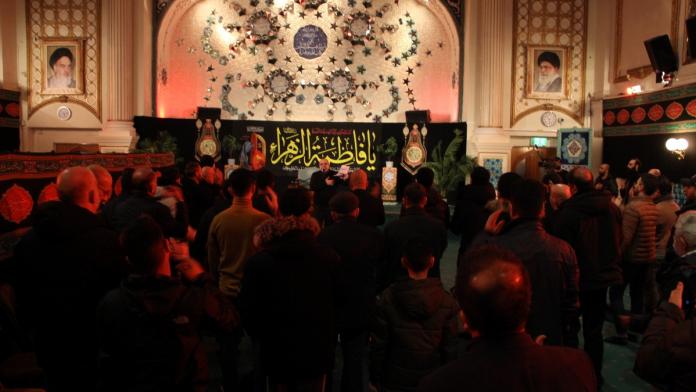 On the occasion of the martyrdom anniversary of the daughter of the Prophet of Islam (s.a.w.a.), Hazrat Siddiqa Tahira (s.a.), a mourning ceremony was held in the Islamic Centre of England with the presence of the lovers of the Ahl al-Bayt (puht) from different nationalities.

This ceremony held on the December 26, 2022, to mark the second period of Fatemiyya (pbuh), was held in both Arabic and Persian. In addition to the speeches, reciters of the Ahl al-Bayt (pbut) also delivered eulogies in remembrance of the mourning of Hazrat Fatima Zahra, (s.a.).

In the ceremony held in Arabic after Maghrib and Isha prayers, H.I. Seyyed Qasim Jalali gave a speech about the virtues of Hazrat Zahra (s.a.), and highlighted the role of the lady of two worlds, Hazrat Zahra (s.a.) in defending and protecting the sanctity of the succession from the departure of the Holy Prophet, peace and blessings of God be upon him, to the time of her martyrdom. This is considered as one of the most important periods in Islamic history because she was the initiator of defending the security of the succession.

Mourning ceremonies were also held in Farsi in which H.I. Mohammadian delivered a speech. He compared the beliefs of true people with the purified tree which has firm roots as referred to in Surah Ibrahim. From this point of view, faithful people are steadfast in the this life and in hereafter, but when welfare and well-being prevail over religion and belief, religious people like the Ansar also deviate from the divine path until they left of Hazrat Zahra (s.a.) alone in support of the Wilayat (Succession).

The reciters of eulogies of the Ahl al-Bayt (a.s.) recited their lamentations in continuation of the programme.

Auspicious Birth Celebrations of Lady Fatima (s.a.) in English and Persian at the Islamic Centre of England