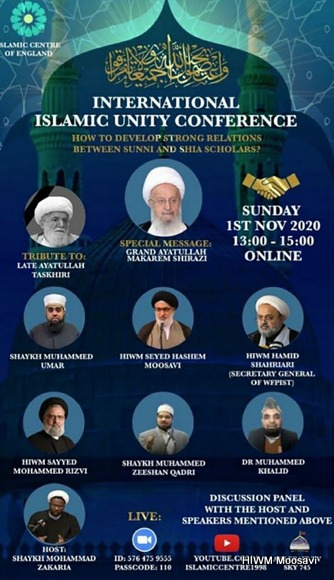 The International Conference on Islamic Unity will be held next Sunday at the Islamic Centre of England with the participation of Sunni and Shiite scholars and thinkers.

According to the public relations of the Islamic Centre of England, this conference will take place at the centre in London and through virtual presence, with the aim of exploring ways to expand deep relations between Shiite and Sunni scholars.

According to this report, the International Conference on Islamic Unity, in compliance with the protocols, a few numbers of Shiite and Sunni scholars will attend the conference at the Islamic Centre of England and the rest of the scholars will participate in the conference virtually.

The conference will begin with a special message from the supreme Shiite authority, Ayatollah Makarem Shirazi, and Sunni and Shiite scholars will speak after commemorating the memory of the late Ayatollah Taskhiri, the great scholar of dialogue and unity between Islamic sects.

In addition to this, Hojjat al-Islam wal-Muslimin Seyed Hashem Moosavi, director of the Islamic Center of England and representative of the Supreme Leader in the UK will be giving a talk alongside great Shia and Sunni scholars and thinkers. Among the Shiite scholars are Hojjat al-Islam wal-Muslimin Hamid Shahriari and Seyed Mohammad Razavi and among the Sunni scholars’ Sheikh Mohammad Omar, Dr Mohammad Khalid and Sheikh Mohammad Zishan Qadri.

In this conference, participants can ask questions from all the speakers.

In this conference, will be played, videos about the birth of the Holy Prophet (S), the unity of the Islamic world and the need for Muslims to be aware in recognizing the enemy and its divisive policies.