HomeNewsICEL NewsMessage of condolence from the representative of the Supreme Leader in Britain... 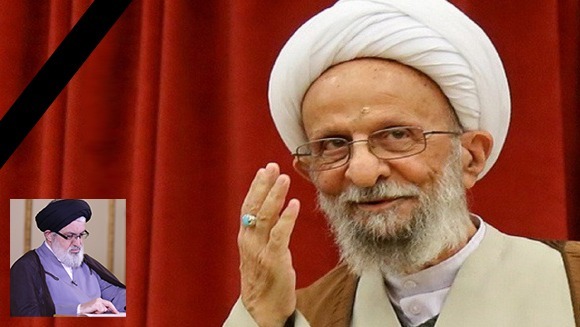 In response to the demise of the great scholar and the member of the Assembly of Experts regarding the Leadership, Ayatollah Sheykh Mohammad Taqi Mesbah Yazdi, Hujjat al-Islam wal Muslimeen, Seyed Hashem Moosavi, the Director of the Islamic Centre of England, has issued the following message:

In the Name of Allah the most Beneficent, the Merciful,  Inna Lillahi Wa Inna Ilaihi Raaji’oon,  The passing away of the wise jurist and great Scholar, Ayatollah Haj Sheikh Mohammad Taqi Mesbah Yazdi, has caused deep pain and sadness in the Islamic Ummah.

Ayatollah Mesbah Yazdi had promoted the enlightened school of Ahl al-Bayt (as) from the early years of his youth to the last moments of his precious life. He had always been a pioneer and was exceptional in defending the principles of Islam and the lofty values of the Islamic Revolution.

Because of his services in generating religious knowledge and explaining divine thought, the memory of this invaluable theologian and thinker will remain eternal, leaving behind many distinguished and influential students to represent him in various fields.

During these days when we commemorate the martyrdom of Hazrat Fatimah Zahra (peace be upon her), I would like to offer my condolences to the Imam of our Time, Imam Mahdi (ATFS), and to the great religious authorities, especially the Supreme Leader as well as to the theologians and students of religious knowledge all over the world on the loss of this great Jurist.

I ask Almighty Allah to bless his soul with forgiveness and mercy and to place him amongst the highest ranks in the Hereafter.