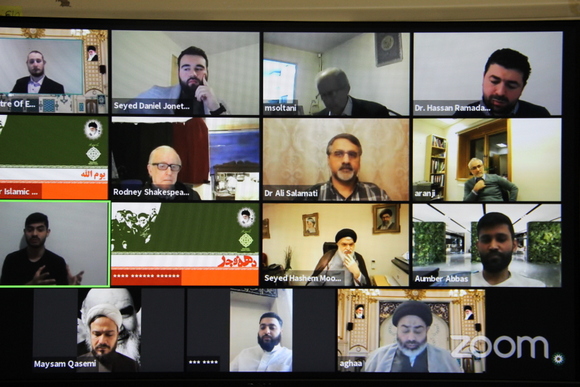 According to the esteemed Christian and Muslim Panelists in the celebration of the 42nd anniversary of the victory of the Islamic Revolution, which was held online last night in the Islamic Center of England, ISIS and terrorism are the w

orks of the West and Iran are at the forefront of the fight against it.

As reported by the public relations department of the Islamic Centre of England, the event which was attended and welcomed by many youths, and those who celebrate the Islamic revolution, was titled “The secret of the success of the Islamic Revolution, in confrontation with immense challenges” which included a pivotal discussion

on the Letter to the youth written by Grand Ayatollah Khamenei the supreme leader of the Islamic Republic of Iran.

In this ceremony, Hojjat-ul-Islam Wal Muslimeen Mousavi, the representative of the Supreme Leader of Iran in the United Kingdom, in a speech, pointing out that this year is the second year that we have entered the second phase of the victory of the revolution, said: We have gathered here today through the valuable means of virtual technology, to recognize our duties through this revolutionary movement by studying the Supreme Leaders Letter to the youth in the west once again.

The Director of the Islamic Centre of England added that at the end of the fourth decade of the revolution, the Supreme Leader of the Islamic Revolution wrote two letters to the Western youth, which contained important messages, and considering the fulfillment of the wise predictions of the Supreme Leader, he continued: The first letter of the Supreme Leader in 2014 was published two weeks after the insult of the magazine Charlie Hebdo to the Holy Prophet of Islam, and In this Letter, The Leader of The Islamic Revolution advised that the youth should gain their knowledge about Islam from authentic sources rather than the propagations of western media and that o

ur common worry, today, is terrorism.

HWM Mousavi said: this letter was tremendously resonated as  Richard Falk commented that this letter contains beautiful and humanitarian content, Even though it is written for the youth, it matters to us all. This letter could become the foundation of ethics and spirituality among societies and it can alleviate untrustworthiness and aid in the establishment of security in the world.

The director of the ICEL considered Islamophobia as another important message of this letter and asked about the origin of Islamophobia.

He added that in Islam that we know and try to introduce ourselves to others are not allowed to deceive even an animal, let alone harm it, so if the place of animals in Islam is so respectable, then man certainly has a superior position.

The representative of the supreme leader in the UK said: One of our duties during the second phase of the Islamic revolution, is to pay attention to the content of this letter to alleviate the anti-Islam feelings in the west. Why has the mainstream media in the west neglected this letter? Alison Weir, a freelance journalist has an answer. She believes that if they cover this letter, they fear that they would have to dwell upon it in more depth and this is what they want l

Therefore, Muslim youth living in the west could use the content of this letter to introduce authentic Islam to westerners and this letter can establish a bridge between  Islam and the west and we can all have an influential role in building this bridge.

The head of the ICEL stated that the supreme leader of Iran has not invited the western youth to Islam, instead he has requested them to change their source of knowledge of Islam from western sources to an authentic source which is the Holy Quran.

HWM Mousavi added: one of the problems in the west is that they do not want to accept an authentic form of Islam which is represented by the Islamic revolution of Iran and that is why they keep trying to show a falsified version of Islam.

The representative of the supreme leader of Iran mentioned both spiritual and technological advancements of Iran after the Islamic revolution in these 42 years and said: The Islamic Revolution of Iran is doing its best to show the real image of Islam and our most important message of this online conference, is that in the dawn of the new year of this revolution, let us aim to deliver an image of Islam that is based on reason, intellect and full of kindness and peace.

The other panelist of this conference was Rodney Shakespeare. He described the two letters written by Grand Ayatollah Khamenei as a fair and trustworthy judgment about Islam written in the most beautiful . He added that: these two letters are an appeal to the youth to have an open mind about Islam. This British  stated that: according to the letters, the youth should discover the potential that Islam has the solution for the problems of the world. Then he listed the problems, such as the likeliness of a  global economic collapse, increasing gap between the rich and poor, growing authoritarianism, ecological disaster, military tension, and many more problems. He added that: of course the vicious western writers have an answer to the question; Islam has no solution for any of it.

Mr.Shakespeare said: I think Shi’a Islam is ideally suited to give a lead to the world which needs a solution in all areas. He stated that he has written a 90 pages commentary book on these two letters for free. And he added in the introduction of his book he has introduced a book namely our economy written by The Great Shia thinker Sayyid Muhammad Baqir al-Sadr.

MS Rindala Jabbour, a Christian Lebanese academic figure,  journalist, , and political activist was the next speaker of this virtual conference. She said Iran has never attacked our territory and was never an enemy to our country, but Isreal and terrorism are indeed. In continuation, she mentioned her journey’s to Iran and described Iran as a pluralistic country that other religions are not only free to do their rituals but also have a representative in the Iranian Parliament.

She said: in Iran, men and women are equally well educated even though Iran has been under the pressure of sanctions. This Lebanese journalist added that Iran has not started any war at all, and the wars in Iraq, Syria, and Yemen are not initiated by Iran but were started by ISIS and Al-Nusrah. She said Iran is the symbol of resistance against terrorism.

Dr. Hasan Ramadan based in Germany was the other speaker at this conference. He compared the letter written by Grand Ayatollah Khamenei with a well-known letter among Shi’a Muslims written by the First Shi’a Imam Ali ibn Abi Talib (A.S) to Malik al-Ashtar his appointed governor of Egypt. Then he said, Imam Ali, has written a letter to Malik because he had trusted him and Imama was sure that Malik will accept his recommendations. Imam Khamenei has trusted the western youth too.

Mr. Ramadan stated that: this letter is not written to professors or politicians because he is fully aware that it is solely youth that has this power to change the mentality of the societies. This Muslim European scholar said: the dark sides of the western societies should be uncovered by Muslim youth living in the west; for instance, in the west, peace, justice and freedom are commonly talked about, but the unfortunate hidden fact is that ISIS was created by the west.

Dr. Ramadan continued: if the youth do not represent the facts about the west, no other media will not do it. In the end, he stated that only Islam is a real solution for our world, other man-made ideologies cannot solve our problems.

In addition to the speeches, the youth living in the west had this opportunity to have a friendly discussion regarding the two letters written by Grand Ayatollah Khamenei to the western youth. This exchange of ideas was held through the collaboration of twelve cultural, student, religious, and political organizations in the Islamic Centre of England.

The participants of this discussion panel were all in agreement that Islam is the final solution for all the problems that the world is suffering from. Some of them stated that the youth should show the hypocrisy and double standards of the west.

The virtual ceremony of the 42nd Anniversary of the victory of the Islamic revolution of Iran was held in the Islamic Centre of England and dozens of video clips were shown to express the spiritual and technological advancements of the Islamic Republic of Iran during the past 42 years. The highlight of these clips was the letter of  Grand Ayatollah Khamenei which is written to the western youth.