HomeNewsSpecial NewsPractical Solutions to Redress Abandonment of the Holy Qur’an and Disseminate its...

Practical Solutions to Redress Abandonment of the Holy Qur’an and Disseminate its Teachings Especially to the Youth. 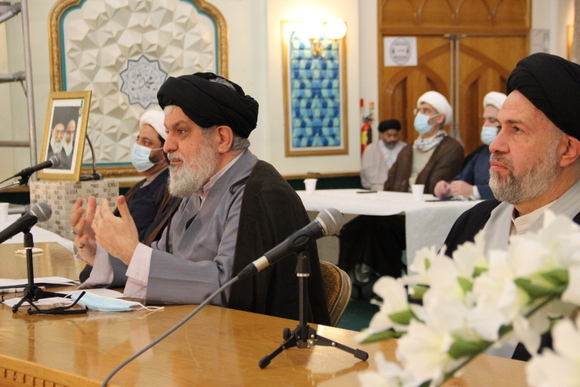 The 32nd Summit of Shia Muslim Scholars took place on the 10th of April at the Islamic Centre of England physically and virtually in accordance covid-19 restrictions.

Seyed Hashem Moosavi the Director of the Islamic Centre of England, spoke about how the Qur’an has been abandoned and that we must be at the service of this Holy Book. He advised that the solutions given in the summit by the respected scholars should be collected officially in a book to eliminate this abandonment and neglect of the Holy Qur’an. He went on to describe how the Qur’an has been abandoned today and offered some solutions.

The Director of the Islamic Centre of England said that this abandonment is manifested in two ways: the first manifestation of abandoning or neglecting the Holy Qur’an is in its recitation. For example, when we compare the number of reciters we have to the ratio of Muslims in the world, they are very few indeed. He went on to point out our failure to observe the rights of the Qur’an, such as not being in a state of ritual purity when reading it and not reading with contemplation and sincerity, are other ways we neglect the Qur’an. His eminence said that unfortunately, sometimes we recite the Qur’an only to show off.

The second way we neglect the Qur’an is in our lack of observing the command in the Qur’an to listen when it is recited. Another abandonment on our part is our negligence in memorising and reflecting upon the Holy Qur’an which is much easier compared to memorising other texts. Seyed Hashem Moosavi stated that in fact the most important point is our failure to implement the teachings of the Holy Qur’an

The Director of the Islamic Centre of England then went on to offer solutions to the problems of the youth. He said that we need to explain to the youth that the Holy Qur’an is for all times, and in fact, that even after 1400 years it is still relevant today. He then mentioned that the Qur’an needs to be explained in simple language and in English. Seyed Hashem Moosavi said that we have many commentaries of the Holy Qur’an, but few are actually directed to the youth. He emphasised the need for us to use our mosques and religious centres to explain the Holy Qur’an, and how our scholars use the narrations of the Prophet SAWA and Imams AS rather than the verses of the Holy Qur’an as the focal point in their lectures. Another solution he mentioned is that these awards ceremonies should be continued for the servants of the Holy Qur’an and that such events should be advertised widely and effectively.  The final point the respected scholar mentioned was that next year’s summit will incorporate workshops into the agenda in order to help scholars improve their skills in the sciences of commentary of the Holy Qur’an and the rules of recitation.

Next on the panel was Sheikh Ali Alemi from the Islamic Universal Association in London. He opened his speech with a very relevant narration from our Holy Prophet Muhammad SAWA  in which he says that in times of confusion one should turn towards the Qur’an and distance oneself from fitnah, or the discord of the times. He then went on to explain the importance of the upcoming month of Ramadan and its merits and how vital it is to pay due attention to this blessed month. He emphasised the importance of the subject of this year’s summit, especially for those youth that are living in the West who, for whatever reason, may have settled here for work or education, and Ramadan being the best time of the Islamic year to revive the words of the Holy Qur’an. He said the Prophet SAWA propagated his message of the Oneness of Allah, of teaching the Qur’an, paying attention to its words and the link to his prophetic mission which is mentioned four times in the Qur’an. He mentioned the famous companion of the Holy Prophet SAWA Musab ibn Umair who became Muslim and at the tender age of 25 and became very attached to learning and understanding the Qur’an. The Holy Prophet SAWA in the year 12 AH sent twelve people to Medina one of whom was Musab ibn Umair to teach the Qur’an in Medina. This is one of the blessed attributes of the people in Medina who became Muslim because of the Holy Qur’an and not by conquest. Musab was also a flag-bearer in such battles as the battles of Badr and Uhud. He was only 40 years old when he was martyred on the battlefield and due to his connection to the Holy Qur’an, the Holy Prophet SAWA read for him the verse in the Holy Qur’an 33:23, ”Among the faithful are men who fulfil what they have pledged to Allah. Of them there are some who have fulfilled their pledge, and some of them who still wait, and they have not changed in the least”. Sheikh Alemi went on to say that unfortunately today people cause discord and confusion and change the words of the Holy Qur’an whereas we need to learn the Qur’an and act upon its teachings. If we want to succeed in this Life and the Hereafter, our success rests with the Qur’an.

Next Sheikh Maysam Qasemi gave a brief summary of the role of Muslim youth and the Qur’an where he emphasised that the most important task of the scholars, is to promote the culture of the Holy Qur’an and Qur’anic way of life.

Sheikh Mohammed Al-Hilli mentioned the situation of youth and their relationship with the Qur’an and Islam especially in understanding their duties and responsibilities. He pointed out a lack in available material for the youth means that they cannot understand Islamic teachings which leads to doubts about their beliefs. His solution was to simplify Islamic teachings for the youth on social media platforms and in booklets.

Sheikh Kadhim Maroofi in his address to the summit said the Qur’an needs to become the centre of our lives and not simply brought out only for mourning ceremonies for the deceased or for safety when we travel. The youth must see successful examples of those acquainted with the Qur’an so that they will also be attracted to its teachings.

The next speaker at the summit was Sayyid Ali Raza Rizvi who is currently president of the Assembly of Shia Scholars in Europe. He began by saying how we must make the Holy Qur’an and its recitation the focal point of our religious gatherings and it is because the Qur’an was abandoned and forgotten that the tragedy of Ashura and the martyrdom of Imam Hussain AS took place.

Sayyid Ali Raza Rizvi emphasised how extremely important it is to show the practical aspects of the Qur’an as it guides to the best path and how the verses are connected to our daily lives. He went on to say that the youth need to see the Qur’an as a living book and not the way we usually show the Qur’an as only a historical book. He said that we need to advertise the Qur’an to etch it into our hearts and minds as it is the final testament.

He concluded his speech by saying that just as we preach the Holy Qur’an to non-Muslims, we need to preach to our youth as well. He pointed out that unfortunately it is non-Muslims that say that the Holy Qur’an is our most accepted book yet we do not appreciate this nor do we preach it effectively to our own youth.

Manager of the Education Department at the Islamic Centre of England, spoke next about organising an event to select servants of the Holy Qur’an in the West which would cover Europe, the U.S., Canada and Australia. The aim of this is to promote excellent role models of servants of the Holy Qur’an where individuals would be recognised based on their knowledge, ethical behaviour and practice in the field of Qur’an. They would include Qur’anic activities in the areas of art, education, research, new technologies and media and management. Individuals can currently start nominating potential candidates of the servants of Qur’an.

From Oslo, HIWM Sayyid Shimshad Rezavi president of Council of Imamia Schengen Scholars was invited to speak. He mentioned how the Qur’an has been abandoned and that having lived in the West for 35 years, he has appreciated how all the holy books were also sent down during the holy month of Ramadhan. He reminded the attendees how the best of people are those that learn the Qur’an and teach the Qur’an. This scholar mentioned esteemed personalities such as Allamah Majlisi and Ayatollah Makarem Shirazi and their very deep approach to reflecting on each verse of the Qur’an.

His eminence mentioned another esteemed scholar, Haj Reza Siraj, who has said that one should not just read the Qur’an but one must actually absorb it to the extent that it affects ones very being.

From London Sheikh Abu Mehdi Al-Turaiki the Imam of Dar Al-Islam centre in London spoke briefly in Arabic about the importance of transferring the true essence of Qur’an to the youth.

Sheikh Ja’far Najm of the Islamic Centre of England chaired the summit and addressed the more than sixty esteemed scholars from across the world. The topic chosen was the role of Muslim youth in promoting the teachings of the Holy Quran.

Sheikh Ja’far Najm of the Islamic Centre of England and chair of the summit of more than sixty international scholars in addressing the role of Muslim youth in promoting the teachings of the Holy Qur’an ended the summit by saying that the solutions proposed in the summit will be collected to create an action plan for pushing this sacred initiative forward and will be publicly accessible.

The summit ended with a lamentation for Imam Hussain (a.s) by Sheikh Burhan to remember the importance of keeping the Holy Qu’ran alive in the coming season of its revelation, the holy month of Ramadhan.

Mourning ceremony on the anniversary of the departure of the Holy Prophet (PBUH) and the martyrdom of Imam Hasan and Imam Reza (A.S) in...

The Islamic Centre of England condemned the terrorist attack on the followers of Prophet’s household (A.S) in Kunduz

Mourning ceremony on the anniversary of the departure of the Holy Prophet (PBUH) and the martyrdom of Imam Hasan and Imam Reza (A.S) in...

The Islamic Centre of England condemned the terrorist attack on the followers of Prophet’s household (A.S) in Kunduz

The Message of condolence issued by the Islamic Centre of England’s Director, following the departure of the late Polymath, Allameh Hassanzadeh Amoli