HomeNewsSpecial NewsThe Director of the Islamic Centre of England, “Observing the Guidelines and...

The Director of the Islamic Centre of England, “Observing the Guidelines and Formalities of Prayer will Undoubtedly Lead to Human Development”. 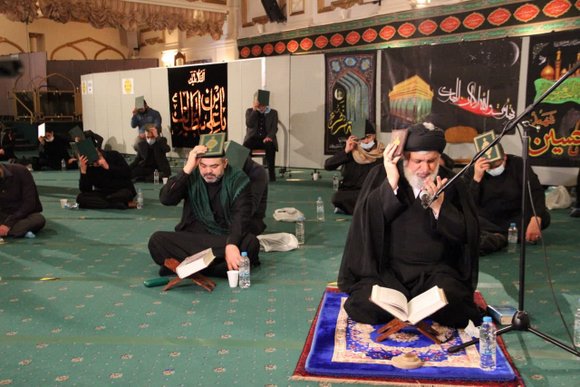 The first ceremony of the Night of Qadr was held last night both online and in-person at the Islamic Centre of England. It coincided with the event when Imam Ali b. Abi Talib (a) was fatally struck with a sword.
According to the Public Relations Department of the Islamic Centre of England, Hujjatul Islam wa al Muslimeen, Seyed Hashem Moosavi, explained the levels and rituals of prayer in this blessed month.
He said, “Prayer is a form of worship, and if we are familiar with the levels of this worship, it will cause our spiritual growth.” Seyed Hashem Moosavi stated that “starting the prayer in the name of God, praising and honouring Him, paying attention to divine blessings, acknowledging our shortcomings, accompanying the prayer with Salawat, and giving thanks are observations that cause the prayer to be answered.
Every leaf is a book of knowledge that signifies the Creator. In this world, the leaf does not move from its place without God’s permission, this belief and knowledge itself is the beginning of all faith and instead of the creation, our view and approach focus on the Creator of the universe instead.”
Referring to the higher levels of prayer, the director of the Islamic Centre of England said, “We go beyond material needs and ask God for spirituality”.
Seyed Hashem Moosavi said, according to Imam Sadiq (a.s), the Night of Qadr is the heart of the Holy Month of Ramadan. The Messenger of God, may God bless him and his progeny, said: ” God has chosen Friday over the other days, Ramadan over the other months, and the Night of Qadr in Ramadan over all other nights”. Therefore, Ramadan is the month when the doors of God’s mercy are opened and the opportunity where the veils between man and God Almighty are removed.
The director of the Islamic Centre of England also emphasized the importance of Laylat al-Qadr and pointed out the most important prayers and du’as of this night. He said that according to the narrations of the Infallibles, repentance from sins, asking for forgiveness, prayer, recitation of the Qur’an, contemplating God and His Creation, and paying attention to the needs of the poor should not be neglected on these nights.
The ritual of holding the Quran over the head was held on the first night of Qadr in the Islamic Centre of England in a spiritual atmosphere in the presence of a number of lovers of the Ahl al-Bayt (ass).
The spiritual proceedings began at 11:30 PM with the recitation of the Qur’an and the prayer of Jawshan al Kabir was recited by three distinguished reciters. At the end of the programme the participants were served Suhur.
On the second and third Nights of Qadr, the same ceremonies will be held.
The ceremony was held in full compliance with hygiene regulations, including wearing of masks, plastic socks, the use of disinfectants, the observance of social distancing and with a limited number of attendees.