HomeNewsSpecial NewsEid prayers at the Islamic Centre of England led by the representative... 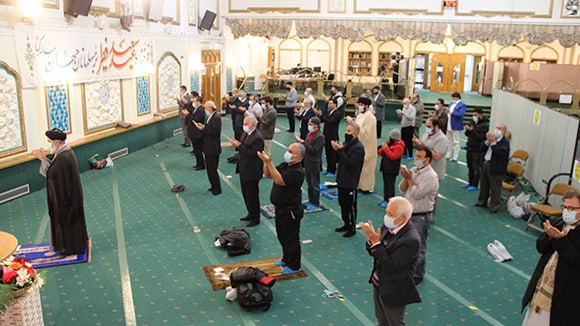 Report from the Public Relations Department of the Islamic Centre of England: Brothers and sisters from various countries attended the religious ceremony. The three gatherings that were held at different times included brothers from the Sunni community among the worshippers which was a highlight of the Eid prayers this year.

In his sermons for the Eid prayers, delivered in English and Persian, HIWM Seyed Hashim Moosavi, Representative of Imam Khamenei sent Eid greetings to the Imam of the Age (a.j), Ayatollah Khamenei, and the Muslims of the world. He went on to say, “Believers have benefitted much after a month of worship and fasting, Qur’an recitation and prayer, and benedictions and supplications. They have made themselves deserving and have received an incomparable spiritual reward which definitely makes this Eid a great one for the Muslims. It is a day of reward and recompense for the Believers and those who do good works. It is God’s special way to replace the corruption of the believers with fasting, sincerity, and faith.

In the second Eid al Fitr sermon, the Director of the Islamic Centre of England cited the catastrophic recent incidents besetting the Islamic world. He said, “Unfortunately the Eid al Fitr this year has been accompanied by painful suffering in Palestine and Afghanistan resulting in large numbers of innocent people being killed and wounded.”

He conveyed his condolences to the families of the victims of the recent crimes in these countries adding, “these savage crimes and mass killings of innocent people in this Holy Month pains the heart of every human being with a conscience. However, on the basis of the divine promise the perpetrators of these crimes will most definitely suffer a severe punishment from God.”

Speaking about the cruel mass killings of High School students at the Kabul Seyyed e Shuhadaa High School this week, Seyed Moosavi once more condemned this terrible crime and said, “Every religious scholar in the Islamic world, every seeker of justice in the world, cannot remain silent when they are confronted with this kind of oppression in the world and think about ending it by any legal means necessary”.

The Director of the Islamic Centre of England thanked attendees at the Centre for their enthusiastic participation at the physical commemorations in the second half of the Month of Ramadan, the Nights of Qadr, and the Eid prayers. He also thanked the passionate online attendees at these events. He gave a special thanks to the media program of the Centre welcoming the religious and cultural broadcast called ‘The Month of Deliverance’ done in four languages focusing on self-purification. It featured calls to prayer from the shrines in Iraq, Syria and Iran, and supplications at dawn (sahri) and at iftar, all of which were improvements over the previous years. He said to the attendees, “We, at the Centre, are your servants and we are very thankful to Almighty God for this great blessing.”