HomeNewsSpecial NewsAttributes of Imam Khomeini (r.a) were discussed as an all-encompassing jurist in...

Attributes of Imam Khomeini (r.a) were discussed as an all-encompassing jurist in London 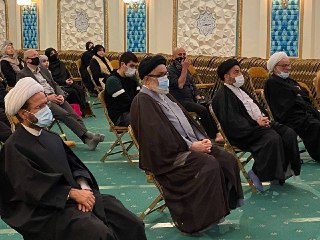 The 32nd anniversary of the passing of Imam Khomeini was held in the Islamic Centre of England. In this in-person and virtual Seminar, dozens of esteemed scholars and devotees of the Islamic revolution participated.

HIWM Seyed Hashem Moosavi, the Director of the Islamic Centre of England, introduced Imam Khomeini (r.a) as an innovative and up-to-date jurist. He said innovation is amongst the attributes of God Almighty, and in the second degree, divine prophets are innovative people for human lives. He added in our modern world, the phenomenon of the Islamic Revolution of Iran that was lead by Imama Khomeini (r.a) or, in other words, the establishment of a religious estate that is deeply rooted in the Islamic Shari’a could be considered as one of the most significant innovations in the history of nations.

Moreover, the ICEL director said Imam Khomeini (r.a) could bring religion into social life so that religion is no longer limited to individual life after the Islamic Revolution. In terms of Imam Khomeini’s (r.a) characteristics, HIWM Moosavi said from the advent of his movement Imam Khomeini (r.a) followed the lifestyle of the Holy Prophet of Islam, so based on that, most of the Islamic rulings are the source for social and political services. Islamic rituals are part of political and social contemplation. For instance, the congregational prayer, Haj, or the Friday Prayer, in addition to spiritual and ethical consequences, have political significance too.
‌‌‌The other speaker of this Seminar, Ayatollah Hadavi Tehrani, described Imam Khomeini (r.a) as one of the most significant influencers in our contemporary world. He said Imam Khomeini (r.a) is a multidimensional character; therefore, it is difficult to comprehend him.
Ayatollah Hadavi Tehrani said: “One of the dimensions of Imam Khomeini’s personality is his scientific aspect and comprehensive knowledge in various fields of Islamic sciences, and he is one of the jurists who place great emphasis on social jurisprudence in various areas of human life;” as long as economics, politics, human rights, etc. He added: “The Islamic Revolution showed the product of the thought of this great jurist; a country can be managed by relying on the concepts and values ​​of God and Islam. Meanwhile, about a century ago, the German philosopher Nietzsche spoke of the death of God and The destruction of religion, and  Bertrand Russell of England believed: Religion has no place in human society.

Another speaker of the Seminar was Ms Sobeiti, a British sociologist who called the Islamic Revolution of Iran led by Imam Khomeini the last impenetrable government in the Shiite religion and the closest government to pure Muhammadi Islam after Imam Ali (as) and added: The support of the people and the leadership of the Islamic Revolution changed the path of authority.

This religious sociologist and lover of the Islamic Revolution of Iran, referring to the influential features of Imam Khomeini, added: The establishment of the Islamic Republic and the formation of a successful religious government based on the pure principles of Islam, the construction of government based on popular vote, the introduction of a political model of governance in favour The people of the world enumerated the flawless and unique leadership, the goals of a government away from personal interests, independence and away from dependence as among the characteristics of the leadership of Imam (r.a)in the Islamic Revolution of Iran.

Mohammad Rezvan, another religious thinker, living in England, said in a speech: Imam Khomeini (r.a) was the most prominent religious scholar in history who gave a special place to seminaries.

This religious expert added: Imam Khomeini (r.a) was not limited to a religious scholar but reformed society like an intellectual figure.

Mr Rezvan referred to the struggles of the Imam throughout history, including before and after the revolution: The Imam fought against the various misguided groups.

Mohammad Rezvan added: Imam Khomeini, in addition to great enduring crises in his time, including the pressures of the Eastern and Western empires and the imposition of the eight-year war on Iran, never left the Iranian people without guidance and leadership.

The thirty-second anniversary of Imam Khomeini’s passing away was held in the Islamic Center of England yesterday evening, coinciding with the 4th of June 2021 and the 13th of Khordad 1400, in the shadow of the health laws due to corona restrictions in the Islamic Centre of England in London. Sending video messages by children under the age of 12 from Britain, India, Pakistan and Nigeria about Imam Khomeini were special effects. Several clips and interviews about Imam Khomeini’s positions on Velayat-e-Faqih and democracy were broadcast in English during the ceremony.