Speakers reviewed the reasons for the everlasting popularity of Imam al-Ridha (a.s) at the Islamic Centre of England 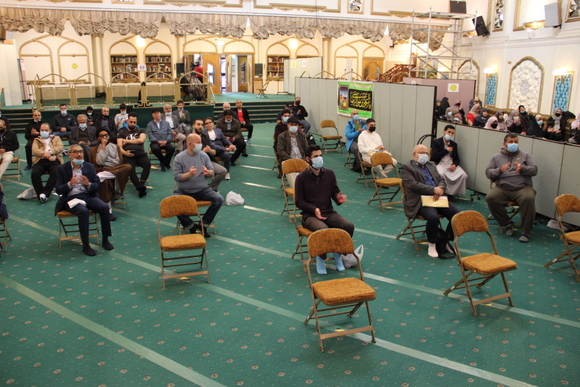 A celebration on the occasion of the birth anniversary of Imam al-Ridha took part at the Islamic Centre of England’s main hall.
On Tuesday evening, this ceremony was held on 22nd of June 2021, in three languages Arabic, English and Persian, both online and with physical attendance.

In the ceremony, which started at 7 pm in Arabic, HIWM Muhammad al-Rafi’i, pointed to two characteristics of Imam al-Ridha (a.s) and said: God had a popular position among the people. He also added: Al-Ma’mun held many debates between him and the elders of other religions to question the situation and knowledge of Imam al-Ridha, but Imam al-Ridha was always victorious and proud in the discussions.

In the continuation of this ceremony, after Maddahi, which was presented by Mullah Bassem Al-Daraji and playing the video clip, Hojjatul Islam and Muslims Farazdaq Rizvi gave a speech in English and spoke about the virtues of the Eighth Imam PBUH and stated: our Imams do not need the worldly caliphate this is because Imam is appointed by God Almighty, not by people.
In the third part of the ceremony, which was held in Persian, after the screening of the documentary about Imam al-Ridha, HIWM Reza Loni referred to the personality traits of the eighth Imam. He mentioned forgiveness, humility, kindness and generosity as the characteristics of Imam al-Ridha (a.s). He added that the behaviour and manners of the eighth Imam made him popular among everyone.

The ceremony was broadcast live and svaed on the social media of the Islamic Centre of England.

Director of the Islamic Centre of England: What was the Goal of the Recent Riots?