HomeNewsSpecial NewsCommemoration Majlis for martyrdom of Imam Mohammad Baqir (as) held at the...

Commemoration Majlis for martyrdom of Imam Mohammad Baqir (as) held at the Islamic of Centre of England. 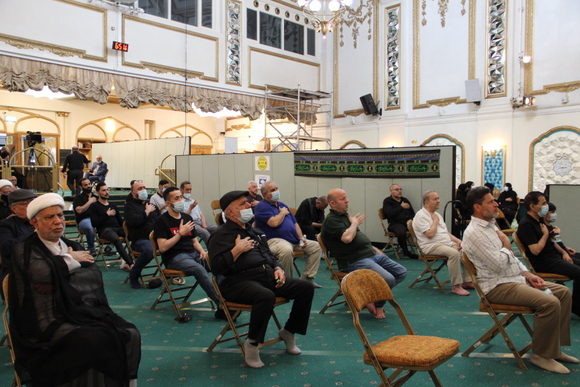 The commemoration of Majlis on the anniversary of the martyrdom of Imam Mohammad Baqir (as) was held in person and virtually at the Islamic Centre of England.

In this Majlis which was held on Sunday evening, the last day of health restrictions in England, in compliance with health regulations, a speech about the virtues of Imam Mohammad Baqir (AS) was delivered to the lovers of the Ahl al-Bayt (AS) and they have mourned for their  5th Imam.

At the beginning of the Majlis, Sheikh Fazel Al-Khatib said in a speech in Arabic: Imam Baqir (as) at the age of 57 was a master of all sciences and took it out of his treasures. This Arabic-speaking preacher added: Imam Baqir (as) took advantage of a period of political calm to expand Islamic sciences and to Guide the people based on Islamic morals and teachings. Sheikh Fazel Al-Khatib said: The fifth Imam of the Shiites trained many students in the fields of Islamic sciences and became an authentic reference for the scholars and the community members.

Hujjat-ul-Islam Wal Muslemeen Abedi, stating that the prophets as well as the infallible personalities used to pray for others before praying for themselves, added: Praying first for others and then for oneself was one of the famous characteristics of Hazrat Zahra (AS) because as narrated by Imam Hassan Mojtaba (AS), He said, “I saw my mother, in her midnight prayers, She prayed for others in her entire prayers, when I asked her the reason for why she did pray for others at her first stage? She replied: O my son! We prefer first for others especially neighbours’  and then for Ourselves.”

The English-speaking preacher said: “Praying for others has three great benefits, firstly, achieving the double of what God has bestowed on others, secondly, increasing sustenance, and thirdly, the privilege of having Duas of the angels because of praying for others.”

Hujjat-ul-Islam and Muslims Sobhani, pointing out that everyone in this world is tested based on his own understanding of religion, said: Imam Muhammad Baqir (as) said about people that some are worldly and some are focusing on the hereafter, and those who are worldly are negligent. , Pride and ignorance and those who are focusing on hereafter are more practical, learning from the world and ready for divine tests.

In this Majlis, the Lovers of Ahl al-Bayt (PBUH) mourned the martyrdom of Imam Mohammad Baqir (PBUH) in different languages. This program was also broadcast live on the virtual networks of the Islamic Centre of England.

Photo gallery of the commemoration ceremony of the martyrdom of Imam Mohammad Baqir (a.s)