HomeNewsSpecial NewsThe Birth Anniversary of Imam Hadi (as) is celebrated at the Islamic... 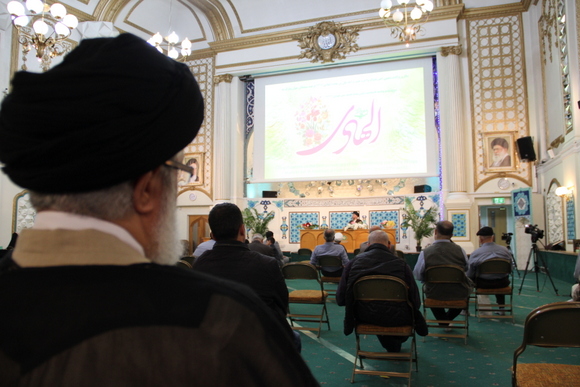 The celebration of the birth anniversary of Imam Hadi (as) was held alongside the lovers of Ahl ul-Bayt (as) at the Islamic Centre of England.
The ceremony, took place in three different languages, Arabic, English and Persian, on Monday night, 26 July 2021 from 18:30 to 20;30 where the scholars spoke about the virtues of Imam Hadi (as).

At the beginning of the ceremony, the Arabic Speaker HIWM Dr Abdul Zahra Al-Bandar said: Imam Hadi and Imam Hassan Al-Askari, peace be upon them, took many measures to form a righteous society and prepare them for the Occultation of Imam Mahdi. Dr Al-Bandar added: Imam Hadi tackled intellectual and atheistic deviations in his time while he was arrested by the Abbasid government to stop his activities in reforming the Muslim Ummah. However, Imam Hadi (as) was still an influential personality of his time.