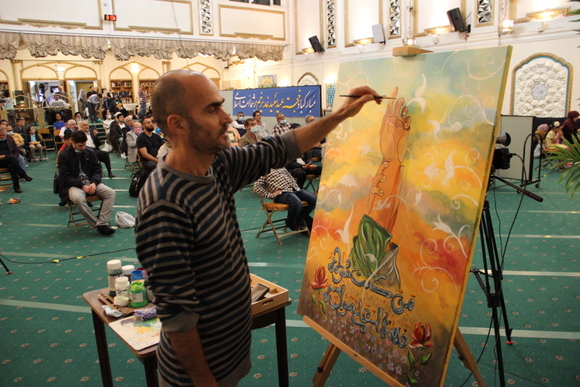 The glorious event of Eid al-Ghadeer was held in the presence of the lovers of the Ahl al-Bayt (a.s) from various nationalities, in three languages: Arabic, English and Persian, at the Islamic Center of England.
This celebration was held on the evening of Thursday, July 29, 2021, coupled with the enthusiasm of the lovers of Ahl al-Bayt (a.s). Furthermore, various programs, including attractive and different music videos in three languages ​​about Ghadeer Khum, were shown.
HIWM Seyed Hashem Moosavi, the director of the Centre, in a speech at the ceremony in English and Persian, stated that Eid al-Ghadeer is a significant and fateful event. Why is Eid al-Ghadeer more important than Eid al-Adha or Eid al-Fitr? He then said: The announcement of the succession and caliphate of Imam Ali (a.s) by the Prophet of Islam (PBUH), the revelation of the verse of completing the religion and the completion of blessings on this day, performing the greatest historical allegiance of Muslims and the particular order of the Prophet to hold allegiance A few days at the scene of Ghadeer Khum in the same year, the farewell pilgrimage is one of the portentous events of Eid al-Ghadeer, which has turned this place from a land and a piece of Hijaz soil into a thought.
The Islamic Centre of England’s director said: “Although Eid al-Fitr and Eid al-Adha are important days and are considered as Islamic holidays, Eid al-Adha is just a reminder of one of the valuable rituals of Hajj and practice of Prophet Ibrahim (a.s) that people have been asked not to forget.” On the day of Eid al-Fitr, which people celebrate at the end of the month of worship, and on that day, nothing special and fateful happened to the Islamic Ummah. Therefore, the reason for the superiority of Eid al-Ghadeer over other Islamic feasts is these crucial features.
HIWM Moosavi called Ashura the bitter fruit of Ghadeer’s forgetfulness and stated: If Ghadeer were understood correctly, Ashura would not have happened.
HIWM Seyed Hashem Moosavi stated that the distortion of the Islamic teaching of Wilayah means the denial of the Imam of the Age and his reappearance.
The Arabic language lecturer, Sheikh Munir Tureihi, called this day an Eid for all humanity and added: Ghadeer is a review of justice for the oppressed people. He said that learning from it is the necessity of all generations, which symbolises a global model for justice in the political dimension of this event.
At the celebration of Eid al-Ghadeer in the Islamic Centre of England, the Maddahs thrilled the audience by composing poems related to the Ghadeer event and the virtues of the Commander of the Faithful Imam Ali (a.s).
Also, in an innovative action in this ceremony, the painting of the Ghadeer event by an Iranian artist simultaneously during the ceremony was created.
By a random choice, this work of art was awarded to one of the attendees. An exhibition of cultural products was also held in the corner of the event.