HomeNewsSpecial NewsOn the threshold of Muharram 1443, the summit of Ulama took place...

On the threshold of Muharram 1443, the summit of Ulama took place in the Islamic Centre of England 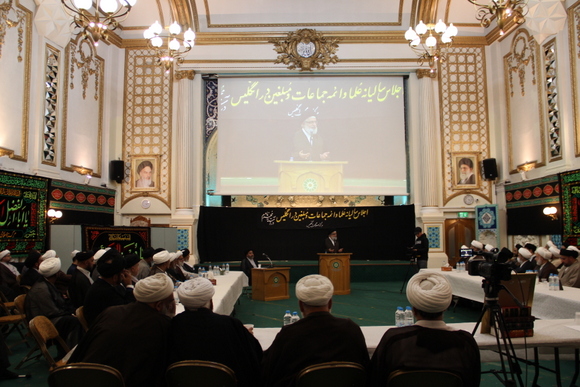 On the 7th of August, the summit of Islamic scholars was held in the Islamic Centre of England. In this event, nearly 200 Islamic scholars living in the occident took part.
In this summit, the Islamic scholars from various backgrounds shared their views about the commemoration of Imam al-Hussain and contemporary issues.
At the beginning of this program, a memorial album of passed away Ulama was showed. Then some of the young scholars shared their views on the topic of this summit which was Ways to convey the message of Ashura to the new generations.
The first keynote addresser of this program was HIWM Dr. Sayyid Fadhil al-Milani. He said: it is essential to pass the message of Imam Hussain (a.s) to the younger generations. Of course, the movement of Imam Hussain (a.s) had many messages; however, I have managed to categorize them into twelve messages, he said. According to Fadhil al-Milani, the critical message of Karbala is the sermon of Imam Hussian (a.s) addressing the troops of Yazeed. When Imam said:
If you do not believe in any religion, at least try to be a truly human being.
He said this message is a key one because nowadays, our youths are brainwashed by various media.
The second keynote addresser of this summit was the Islamic Centre of England’s director, HIWM Seyed Hashem Moosavi. HIWM Moosavi said: this Muharram, we are going to deliver the lectures under the title of Ways to convey the message of Ashura to the new generations, in four languages in the Islamic Centre of England. The reason is that, unfortunately, we are experiencing what is called the generational gap. How can we fix it unless we recognize it? One of the fillers of this gap is art. The traditional sermons could be considered artistry. However, we should not limit ourselves to the conventional sermons which are done behind a pulpit. We have to think of different forms of sermons. Roleplaying, movies, educational sessions for children, spending time with youngsters, and so forth are all kinds of a sermon.
The ICEL director added: the other things we have to increase as scholars are our tolerance and patience. The younger generations need us to answer their questions.
HIWM Said: the attention span in the younger generation has been decreased tremendously; therefore, we should do our best to make our sermons as short as possible. He added: the other advice to The scholars is that to perform the congregational prayers whenever they have the opportunity. We should not deprive people of the blessings of congregational prayers.
The other point that HIWM Moosavi made was about the Hawza Ilmiyya of England. He said the Hawza Ilmiyya of England is going to establish the postgraduate level. So all esteemed scholars living in the Uk are more than welcome to join us as a lecturer.
Finally, the Islamic Centre of England director introduced the permanent administrative office or secretariat for the annual summit of scholars in the Islamic Centre of England. He urged scholars to share their views and criticisms with this secretariat for the betterment of the annual summit.
At the end of this conference, HIWM Borhan recited a eulogy for the Master of martyrs Imam Hussain (a.s).