33rd summit of Muslim scholars in the Islamic Centre of England 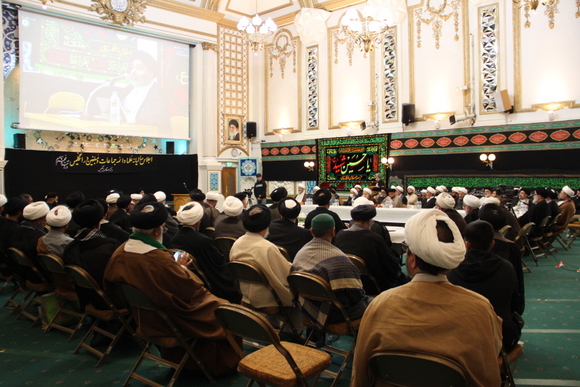 On the 7th of August, on the eve of Muharram, the Islamic Centre of England held the 33rd summit of Muslim scholars. Nearly 160 ulama from across the UK and Europe have taken part in the summit. The theme of the Summit was, “Ways to Convey the Message of Ashura to the New Generations.”
The programme began with the recitation of the Holy Quran followed by a supplication for ulama who had passed away to honour their efforts and then a number of scholars shared their views on the topic of the summit.
The first person to address the gathering was Hujjatul Islam wa al-Muslimeen Prof. Sayyid Fadhil al-Milani. He said that passing the message of Imam Hussain (a.s) to the younger generation was essential. In terms of the message of Imam Hussain he characterized his movement into twelve messages, and that the critical message of Karbala can be found in the sermon of the Imam (a.s) when he addressed the troops of Yazeed when the Imam said,
“If you do not believe in any religion, at least try to be a true human being.”
Dr al-Milani said that this message is key because nowadays, our youth are brainwashed by various media.
The keynote speaker was the director of the Islamic Centre of England, HIWM Seyed Hashem Moosavi. Seyed Moosavi said that in this Muharram, we are going to deliver lectures in the Islamic Centre of England under the title of Ways to Convey the Message of Ashura to the New Generations in four languages. He said that the reason for this is because unfortunately, we are experiencing a generation gap and that we cannot fix it unless we recognize it. He said that one way of filling this gap is art. He described the traditional sermon as a form of art but we should not limit ourselves to conventional sermons that are usually presented from a pulpit. He emphasized that we have to think of presenting the sermon in different ways, such as roleplaying, films, educational sessions for children, and in spending time with youngsters.
The director of the Islamic Centre of England added that scholars also have to increase their tolerance and patience because the younger generations need them to answer their questions.
Seyed Moosavi also noted that the attention span of young people has decreased tremendously and therefore we should do our best to make our sermons as short as possible. He added that scholars should perform the congregational prayers whenever they have the opportunity and that they should not deprive people of the blessings of congregational prayers.
Hujjatul Islam wa al-Muslimeen Moosavi also announced that the Hawza Ilmiyya of England is going to establish a postgraduate level of studies. So all the scholars living in the UK are more than welcome to contribute to it as lecturers.
Finally, the director of the Islamic Centre of England introduced the permanent administrative office or secretariat for the annual summit of scholars at the Islamic Centre of England. He urged scholars to share their views and criticisms with this secretariat for the betterment of the annual summit.
At the end of this conference, HIWM Borhan recited a eulogy for the Master of Martyrs, Imam Hussain (a.s).