HomeNewsSpecial NewsHosseini's mourning voice in Muharram in the Islamic Centre of England this... 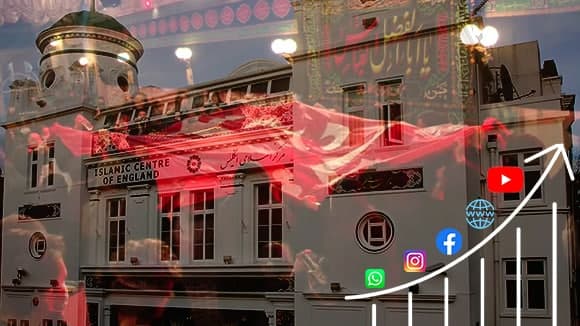 According to the Islamic Centre of England’s director, Muharram’s voice this year was louder than other years at the Islamic Centre.
In an interview, HIWM Seyed Hashem Moosavi said: With the arrangements made in the media sector to attract more audiences, this year, in-person programmes were held in full compliance with health regulations. Also, for the first time in the history of the Islamic Centre of England, all mourning programmes and ceremonies were broadcast live in various languages.
The Islamic Centre of England’s director referred to the statistics available in the virtual networks of the Centre. He said: the number of visits to each of the mourning programmes in the first ten days of Muharram this year, in 24 hours after the programme, was ten to twenty times more than the number of viewers of these programmes.
HIWM Moosavi added that: “We used appropriate and high-quality media services to broadcast live programmes. He added: we should thank God that thousands of lovers of Ahl al-Bayt (a.s) were in their homes watching us in Muharram this year. In this year’s ceremony, the beautiful manifestations of love and affection for Imam Hussein (a.s) and the virtual programmes of this Centre became more popular than every year”.
The Islamic Centre of England’s director referred to the words of the Leader of the Islamic Revolution, who considered cyberspace as a suitable opportunity to convey the words of truth to the world. As a lover of Imam Hussein (a.s), he added: we tried to provide a suitable platform for conveying the Ashura message to the world by using arts in our missionaries and media attractions.