HomeNewsSpecial NewsThe message of condolence issued by the Islamic Centre of England's Director,...

The message of condolence issued by the Islamic Centre of England’s Director, following the departure of the late Grand Ayatollah Sayyid Muhammad-Saeed al-Tabataba’i al-Hakim (r.a) 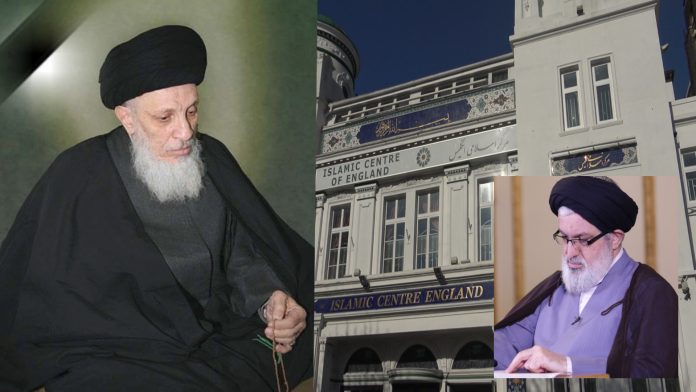 The message of the condolence is as follows.

In the name of Allah, the Beneficent, the Merciful

” Have they not seen how We visit the land diminishing it at its edges? Allah judges, and there is none who may repeal His judgement, and He is swift at reckoning. “ (The Holy Quran 13:41)

The mystical ascension of the wise jurist, the committed Mujahid and one of the great Marja’, the Grand Ayatollah Sayyid Muhammad-Saeed al-Tabataba’i al-Hakim (r.a), is indeed a deprivation and a significant loss for Muslims and especially for the followers of Ahl al-Bayt (peace be upon them).

He has been one of the pillars of knowledge and guidance and indeed one of the most prominent figures of the city of knowledge, An-Najaf al-Ashraf. He was one of the intellectual assets of Shi’a Islam. Undoubtedly, his role in the crusades against Saddam’s Baathist regime and his support for the resistance in front of the ISIS terrorist group will not be forgotten.

I offer my condolences at first to Hazrat Baqiyatullah al-Azam (may Allah hasten his return), then to the great Maraje’, the Supreme Leader of Islamic Revolution, Islamic seminaries, especially the seminary of An-Najaf al-Ashraf and his Household as well as the honourable people of Iraq. I ask Almighty Allah a profound peace for that dear Marja’ beside his mercy, and I also ask Allah for glorious patience and an excellent reward for all his friends and Household.

The Director of the Islamic Centre of England