HomeNewsSpecial NewsThe commemoration ceremony of Arbaʽeen in 2021 was held in the Islamic... 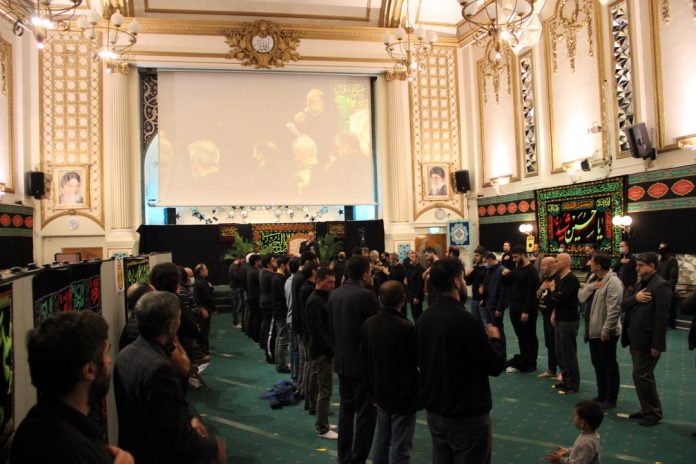 The commemoration ceremony of Arbaʽeen in 2021 was held in the Islamic Centre of England in three languages: Arabic, English and Persian. The lovers of Ahl al-Bayt (a.s) from different nationalities attended in the evening of the 26th, 27th and 28th of September. On the first night, the ceremony was held in Arabic, the second night in English, and the third night in the Persian language. In all three languages, the speakers spoke about the virtues of Arbaʽeen of Imam Hussain (a.s) and the praisers of the Ahl al-Bayt (a.s) recited Noha. Young people -in love with Aba Abdillah Al-Hussein (a.s)- chanted lamentations. In this ceremony, HIWM Seyed Hashem Moosavi, on the nights of 27th and 28th September, spoke about the importance of Arbaʽeen and the philosophy of keeping it alive and added: According to the Holy Quran and Ahadith, forty has unique features and secrets so that human beings reach maturity and intellectual perfection at forty. That is why the noble hadith says: “Everyone who commits sins and do not repent until the age of forty, it will be difficult for them to return.” The Islamic Centre of England’s Director, pointing out that the mission of some prophets began in their forties, said: “All this shows that the number of forty, in forty days and forty years in Islamic culture it is not unwise. Forty is the number of maturities, and perfection is particular.” HIWM Moosavi also listed the five signs of a believer according to an authentic Shi’a Hadith and added: To perform 51 Rok’ats of Salaat (per day, including obligatory as well as Mostahab prayers), Ziarat Arbaʽeen, wearing a ring on the right hand, placing forehead (to prostrate) on the (natural) soil, and say “Bismillah-e-Rahman-e-Rahim, loudly in prayers. Furthermore, the Islamic Centre of England’s Director emphasised in the second part of his speech a hadith from the Shi’a Imams about the need to keep this important event alive in the history of Islam: Imam Sadiq (a.s) set up the first tent to welcome the pilgrims of Imam Hussein (a.s). Today has become a perfect examplar for thousands of People at Mawakib (tents) to welcome Arbaʽeen pilgrims. HIWM Moosavi Regarding the philosophy behind keeping Arbaʽeen alive emphasised that: “Considering that the period of Imamate of Imam Askari (a.s) had extraordinary political and social conditions and the Shi’a Muslims needed to make their symbols public in this era. For this reason, Imam Askari (a.s) links the survival of Shi’a Islam to the pilgrimage of Arbaʽeen. The reason is that the movement of Imam Hussein (a.s) caused the revival of Islam. Therefore, keeping Arbaʽeen alive is keeping Islam alive. The Arabic section speaker HIWM Sheikh Rashad Ansari mentioned the sufferings of the caravan of captives from the evening to Karbala. He said: Sayyida Zaynab, peace be upon her and Zayn al-Abidin (a.s), even though the Umayyad oppressed them, they could defeat Yazid by their Perseverance. Sheikh Shabbar Mahdi, the English lecturer, talked about the teachings of the Arbaʽeen pilgrimage and explained the Maqtal book, mentioned the sufferings of the family of Aba Abdillah Al-Hussein (a.s). He said mourning for Imam Hussain (a.s) and the Arbaʽeen are some of the great symbols of Shi’a Islam. He added: “The most important message of this Shi’a symbol is unity and resistance against oppression.” The ceremony was also attended by some religious foundations, including the Bani Hashem foundation from London.