HomeNewsSpecial NewsThe Message of condolence issued by the Islamic Centre of England's Director,...

The Message of condolence issued by the Islamic Centre of England’s Director, following the departure of the late Polymath, Allameh Hassanzadeh Amoli 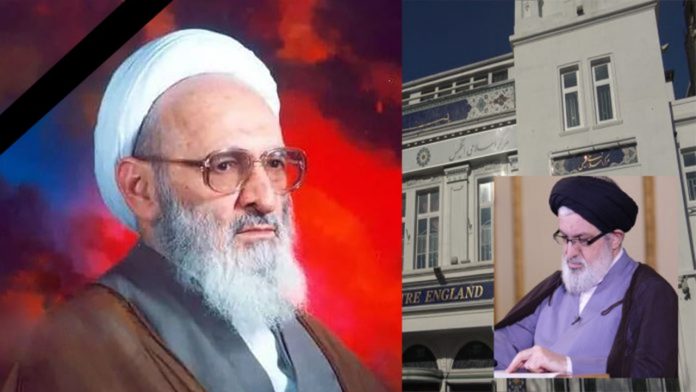 The Message of condolence issued by the Islamic Centre of England’s Director, following the departure of the late Polymath, Allameh Hassanzadeh Amoli On the departure of Ayatollah Hassanzadeh Amoli, A Godly scholar and Polymath theologian, HIWM Moosavi has issued the Message of condolences. The entire Message of the Islamic Centre of England’s Director is as follows: In The Name of Allah, The Most beneficent, The Merciful ‘Indeed we belong to Allah, and to Him do we indeed return. (Holy Quran, 2:56) Allah does not take (the life of ) an Islamic scholar except his departure causes a gap in Islam; nothing can bridge it until the day of judgment. The passing away of the Godly scholar and monotheistic seeker, Ayatollah Hassanzadeh Amoli, caused a feeling of great sorrow and grief. He was a true polymath and the ocean of knowledge of our time. Due to his imaginative ability in various fields of study and reaching the highest stages in Islamic Mysticism, he was a unique and endearing character and worthy exemplar for students at Hawzas and universities. His precious and everlasting books that result from long years of scientific efforts will be a gleaming light before the eyes of every knowledge and spirituality seeker. Besides his high stages in knowledge and spirituality, he was a socially active Islamic scholar; in particular, he has always supported the two wise Imams of the Islamic Republic of Iran. I extend my sincere condolences of this loss primarily to our awaited Imam, the Supreme Leader of the Revolution, esteemed Maraji’, Islamic seminaries, his disciples, and his family. I ask Allah to place him in the highest of the high ranks and grant his family the strength to bear this loss. Seyed Hashem Moosavi The Islamic Centre of England’s Director