HomeNewsSpecial NewsMourning ceremony on the anniversary of the departure of the Holy Prophet...

Mourning ceremony on the anniversary of the departure of the Holy Prophet (PBUH) and the martyrdom of Imam Hasan and Imam Reza (A.S) in the Islamic Centre of England 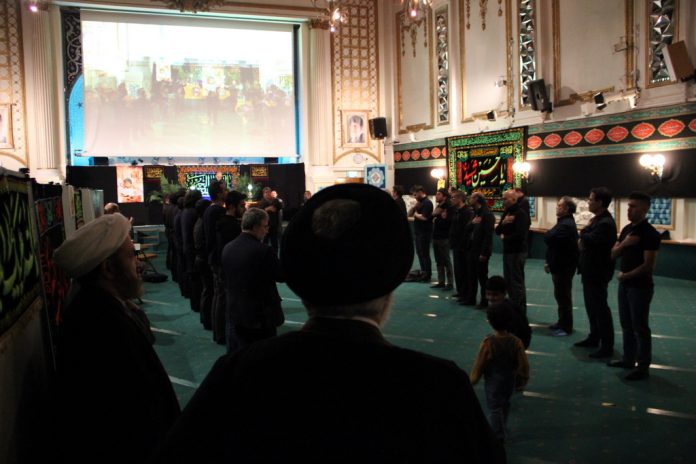 The mourning ceremony for the anniversary of the departure of the great Prophet of Islam (PBUH) and the martyrdom of Imam Hasan and Imam Reza (A.S) was held in the Islamic Centre of England.
This ceremony was just held on 4-6 October 2021 in three languages: Arabic, English, and Persian. HIWM Seyed Hashem Moosavi, the director of the Islamic Centre of England pointed out some of the personality characteristics of the Great Prophet and these two great relics of him.
Moreover, he called the great Prophet of Islam (PBUH) as a complete model of God’s manifestation and said, “Just by following the course it  leads to the guidance and construction of an Islamic life, certainly by following the traditions and lives of the Imams (A.S) who were responsible for expressing his teachings and works will also lead us to the faithful life and achieving eternal happiness.”
Then by referring to a hadith from Imam Hasan (A.S) who considered the meaning of politics as the observance of the right of Allah and the right of those living and dead, he said that Imam Hasan and Imam Reza (A.S) as faithful and intelligent human beings, tried very hard to respect the rights of others and also mentioned to their friends and Shiites to adhere to this very matter.
In the Arabic section, HIWM Sayyid Hashim Shobbar addressed the personality dimensions of the Prophet (PBUH) and talked about the suffering and martyrdom of Imam Hasan (A.S).
In addition, HIWM Sheikh Mirza Abbas, Sayyid Farazdaq Razavi, and Shaykh Ja’far Ladak spoke in English about the characteristics of the last decade of the month of Safar and the reverence of the departure of the Prophet Muhammad and his two sons Imam Hasan and Imam Reza (A.S).
In these three nights, all maddahs were separately recited their notes in Arabic, English, and Persian.