HomeNewsSpecial NewsThe birthday ceremony of Imam Hasan Askari (A.S) was held in the...

The birthday ceremony of Imam Hasan Askari (A.S) was held in the Islamic Centre of England 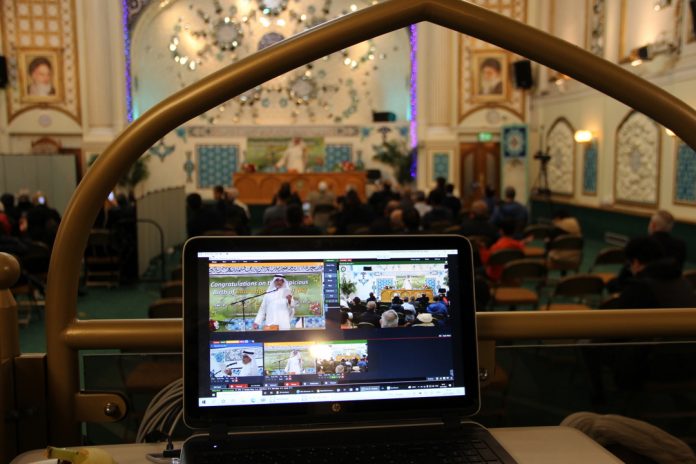 The birthday ceremony of Imam Hasan Askari (A.S) was held in the Islamic Centre of England with the presence of devotees of Prophet’s household (PBUT).

In this ceremony which was held on the 13th of November 2021, the director of the Islamic Centre of England HIWM Seyed Hashem Moosavi addressed the role of Imam Hasan Askari (PBUH) in creating and developing the concepts of Ijtihad [the intense struggle in the way of extracting the rules of Islam from their sources] and Taqlid [conformity or to follow and to go behind someone] in two languages:
Although the Abbasid caliphs did not hesitate to apply any pressure on the Infallible Imams (PBUT), but these pressures were peaked in Samarra [city in Iraq] in the era of Imam Jawad (A.S) and his son Imam Hadi (A.S). Therefore, the problems of Imam Hasan Askari (A.S) were truly greater than Imam Jawad and Imam Hadi (PBUT) for two reasons.

The director of the Islamic Centre of England also added about these two reasons: firstly, Shia had become a great power during the time of Imam Hasan Askari (A.S) and secondly, according to the successive news, the Abbasid dynasty knew that the promised Mahdi (may God hasten his reappearance) would be the son and descendant of Imam Hasan Askari (A.S). Hence, they were constantly stalking him so that they could destroy his son forever.

Moreover, HIWM Moosavi focused on the special measures of Imam Askari (A.S) in preparing Shiites to enter the age of occultation and said: speaking to pure companions from behind the scene, doing most of the activities through his special representatives, encouraging jurisprudents to do Ijtihad and encouraging people to follow the rules were Imam’s actions in preparing Shia to enter the age of occultation.

In his remarks, he also added that the actions of Imam (A.S) were related to the education of the Shia community in order to solve their problems and issues of jurisprudence and belief without having to go to the present Imam [Imam of the time].

The director of the Islamic Centre of England additionally named the most difficult act of Imam Hasan Askari (PBUH) as the father of Imam Mahdi (may Allah hasten his honorable emergence) in persuading people to believe the time of occultation and added that it was difficult for ordinary people to accept it because of the faltering of faith.

Furthermore, the renowned Maddah, Nizar Qatari, who gives an eulogy in three languages, recited Mowludi which was welcomed by the attendees.