HomeAcademicPublishing book titled: Hussain and Struggle for the Justice

Publishing book titled: Hussain and Struggle for the Justice 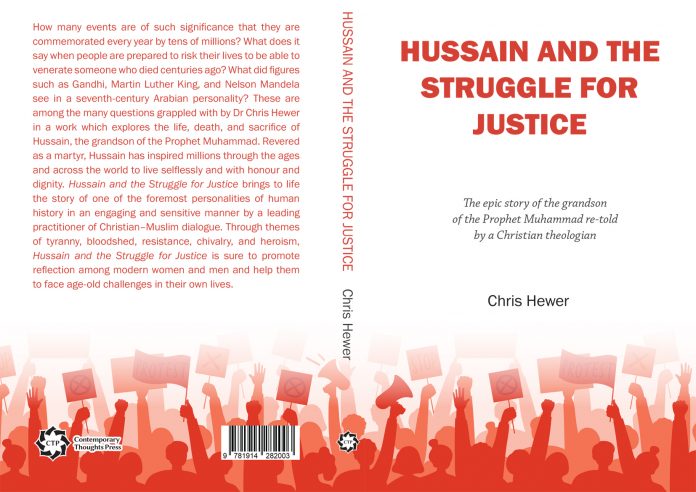 Publishing book titled: Hussain and Struggle for the Justice 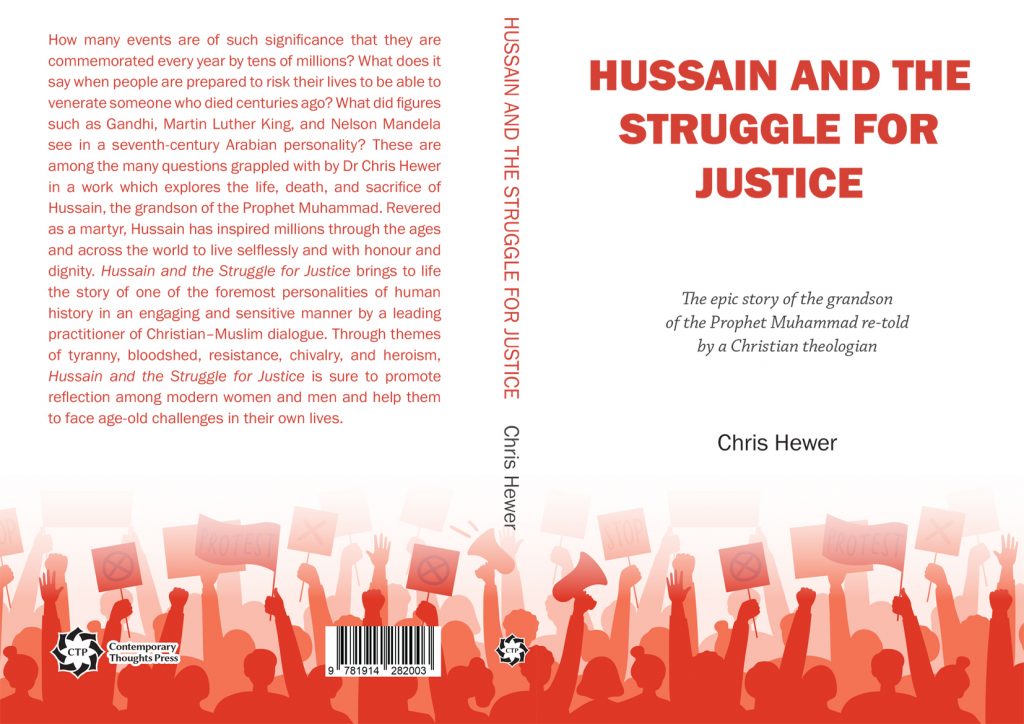 The Contemporary Thoughts Press of the Deputy of Academic Affair intends to publish a book entitled: Hussain and Struggle for the Justice

This book which is about the life of Imam Hussain (as), was written by Dr Chris Hewer as a Christian author and researcher.

The editing and type setting of this book has been done and it will be published soon. 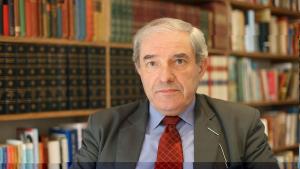 Dr Chris Hewer comes from a background in Christian theology, education, Islamic studies and inter-faith studies. He has worked in the field of ‘Muslims in Britain’ and ‘Christian-Muslim’ relations since 1986. Working in the Centre for the Study of Islam and Christian-Muslim Relations at Selly Oak in Birmingham from 1999 to 2005, as the Adviser on Inter-Faith Relations to the Bishop of Birmingham. From 2006-2010, he was at St Ethelburg a Fellow in Christian-Muslim Relations in London with a brief to deliver adult popular education courses, study days and talks around Greater London. Currently, he is  concentrating on teaching intensive courses, producing resources and writing. 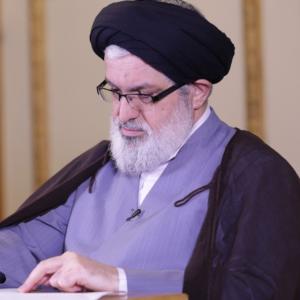 Seyed Hashem Moosavi has written in the introduction of this book:

Imam Hussain is an important figure in the history of Islam who has had a positive impact on Muslims over many centuries. The tragic martyrdom of the imam has always been a strong source of inspiration for Muslims wherever they faced tyranny and oppression. it is one of the reasons, for example, why devout Muslims invoke blessings of peace upon Hussain on every mention of his name. The annual commemoration of the selfless sacrifice of imam Hussain has spurred many Muslims to explore the wisdom of their faith and to live a life which accords with the noble tenets of Islam. It is important, therefore, to try to understand what imam Hussain did throughout his life to maintain a true understanding of the faith established by his grandfather, the Prophet Muhammad. A point came in the life of imam Hussain where he found himself unable to obey the political ruler of his day, Yazid b. Mu’awiya, an unjust and profligate person who openly flouted the teachings of Islam and the tradition of the Prophet Muhammad. While Yazid presented himself as the caliph of the Islamic nation, his careless and immoral lifestyle was considered by many to make him unfit for leadership. it was Yazid who held power over the Islamic territories at the time of the Battle of Karbala in which imam Hussain and seventy-two of his companions were brutally killed with the accompanying women and children taken captive. Many Muslim scholars have attempted to answer ‘what’, ‘how’, and ‘why’ questions pertaining to the life of imam Hussain. non-Muslims have also over the centuries endeavoured to discover the meaning of imam Hussain’s life and death. Nevertheless, there remains a shortage of insightful perspectives written in English on the beacon of humanity that is imam Hussain. to address this, issue the Contemporary Thoughts Press cooperated with Dr Chris Hewer to write a book about imam Hussain. Dr Hewer has extensive experience engaging with Muslims and has

shown great interest in imam Hussain’s intellectual and moral heritage. i hope that the current book will help readers to appreciate imam Hussain and to become better acquainted with not just his deeds and actions but also his spirit.

Director of the Contemporary Thoughts Press

Also Dr Chris Hewer has written in the introduction of this book:

few people in world history have been so important that their names have lived on for centuries. How many events are of such significance that they are commemorated every year by tens of millions? What does it say when people are prepared to risk their lives to be able to take part in such acts of remembrance? Such a person was Hussain, the grandson of Muhammad, the Prophet of Islam. The event was the terrible massacre in 680 when he was killed along with seventy-two companions. Yet this event is thought of as a victory. A victory for justice and truth. A victory to show that the purity of the message brought by the Qur’an and given to Muhammad must be defended at all costs and not defiled by those not worthy of it.

Something had gone horribly wrong in the early Muslim community. Here was the grandson of the Prophet being killed by those who claimed to lead that community, not even fifty years after Muhammad’s death. How could such a catastrophe happen? as the grandson of Muhammad, who had been loved by his grandfather, who always wanted to have him nearby, all Muslims have great love and respect for Hussain. His killing is not a sectarian issue: one group of pious Muslims against another. it was the action of corrupt, tyrannical individuals who had captured the leadership of the Muslim community. Muslims, both Sunni and Shi’a, find that many of the leaders of this Umayyad dynasty, which ruled the Muslims from 661 to 750, were unworthy of that office and were far away from the ideals and practices of Islam as taught by the Qur’an and Muhammad. The massacre took place on the tenth of the Muslim month of Muharram, the first month of the Muslim calendar, at a place called Karbala in Iraq. Shi’a Muslims, who have a special love for, and devotion to, Hussain (who has a unique and revered place in their understanding) will spend the first ten days of this month in deep mourning, remembering those events that culminated in the massacre. The beginning of the Islamic year is not just a season of mourning for Shi’a Muslims but also one of self-reflection and rededication – rededication of their lives to the ideals by which Hussain lived and for which he died. This period of revival comes to a climax on the tenth day, the anniversary of the massacre itself, the day of Ashura. Throughout the world, wherever there are Shi’a Muslims, the day of Ashura will be commemorated as a day of solemn lamentation. Ashura is followed by a period of forty days of subdued mourning, during which no weddings or other festivities take place. The whole season comes to an end on the fortieth day, Arbaeen, when millions of people converge on Karbala to pay their respects to Hussain and his stand for uprightness and justice. This pilgrimage to Karbala on Arbaeen goes way back into history; it commemorates the visit made forty days after the event by members of the family of Hussain who survived the massacre. At times of persecution pilgrims took back roads and travelled by night to avoid mortal danger. Many will walk fifty miles to Karbala from the city of Najaf, which is home to the shrine of Hussain’s father. Others walk even greater distances from Iran or even from India. In recent years, the number of pilgrims has been approaching twenty million, making it the largest

Annual gathering on earth. It is a monumental achievement of the communities through which they pass, that the pilgrims are given food, drink, and first aid;

Places are found for them to rest and sleep. All in an atmosphere of peace and harmony. the history of humankind has witnessed many tragedies; in this sense the massacre at Karbala is not unique. it shows us the depths to which human beings can ink. it shows us also the length to which people are capable of going for the sake of their high ideals, for the sake of the just cause in which they believe, and out of pure love and devotion to god. The martyrdom of Hussain and his companions stands ead and shoulders above such tragedies in the history of Islam. We might reflect upon the status of Hussain, the devastation of his family, what would have happened if he stands had not been taken, and the brilliance of the beacon that was lit on that day to show a way for all men and women to follow. as the story unfolds, there is much here upon which we can all ponder. as we might expect, the vast majority of those who make the Arabian walk are Shi’a Muslims, but Muslims of all traditions take part on this day. Not only Muslims, but people of other religions and people who belong to no faith community. a wide range of people have been inspired by the example of Hussain, from Gandhi to Martin Luther King and nelson Mandela. it is a fundamental principle of religion that great religious figures do not belong to their own community alone but, because they belong to god, they belong to all humankind. Hussain, the hero of Karbala, is worthy of consideration by women and men of every age and place on earth – and that is the inspiration behind this short book. it is hoped that this book will stimulate some discussion about the relevance of Hussain, and his grandfather, for our own times. Both Hussain and the Prophet Muhammad deserve to be better known and to be discussed by the widest possible audience. The story in these pages has been told using traditional Shi’a sources, as listed at the end of the book. Each chapter begins with some discussion points to draw out elements of what follows. all dates are given according to the common era. With profound thanks, I acknowledge the contribution of shaykh Mohammad Saeed Bahmanpour, who read and commented on each chapter, helped to unpick knotty questions, and improved the translation of many quotations.

To buy this book, you can refer to the following link:

28- The words of Imam Ali (as): A small action which is continued with regularity is more beneficial