HomeNewsSpecial NewsThe mourning of first Fatimiyya in 2021 at the Islamic Centre of... 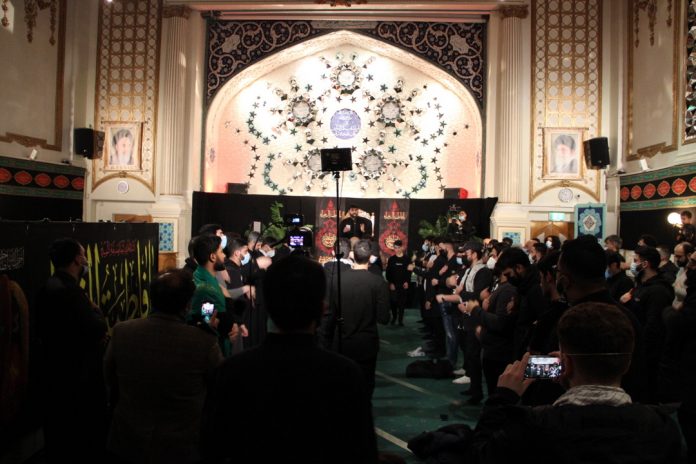 The first Fatimiyya mourning ceremony which was held three nights in the Islamic Centre of England every year was held for five nights this year despite the conditions caused by the Corona and due to the enthusiastic feeling of the young people who love the Ahl al-Bayt (A.S).

In this ceremony, youth in full observance of health regulations mourned for the martyrdom of Hazrat Fatemeh (A.S), the daughter of the Holy Prophet of Islam, and shed tears for her.

The participants in this ceremony were mostly young girls and boys aged 15 to 40 years and most of them showed their love to Hazrat Fatemeh (A.S) with the headbands of ‘Labaik Ya Zahra’ (PBUH).

During these five nights of mourning on the occasion of the first Fatimiyya in the Islamic Centre of England, HIWM Seyed Haidar Hasanain spoke about the importance and position of the Wilayah and stated: One of the mistakes we make in explaining religion is that we often try different aspects of it, while the first thing which is necessary to explain is its purpose and philosophy.

Moreover, he added that the subject of religion and its purpose is nothing but the exaltation of man, he said: “For this reason, the first point we must explain is the reality of mankind her/himself because only by understanding this, we can truly understand religion”.
HIWM Hasanain by asking the question how is a man defined in the Quran?, said: The superiority of man over the angels was due to his knowledge of some transcendent beings that the angels were not able to know and according to numerous narrations from the great Prophet of Islam, those truths are the reality of him and his family [Ahl al-Bayt].

He also stated that, due to the closeness and relationship with the Prophet and his family, the man was superior to the angels and was connected to God. Therefore, to reach the Wilayah of God, we must first understand the Wilayah of those nobles [Ahl al-Bayt] Peace be upon them all.

During the five nights of mourning on the occasion of the first Fatimiyya in the Islamic Centre of England, the mourners of the Ahl al-Bayt (A.S) eulogized every night. The ceremony was in English and started on Wednesday night, December 15th, and lasted for five nights, ending on Sunday night, December 19th, 2021.