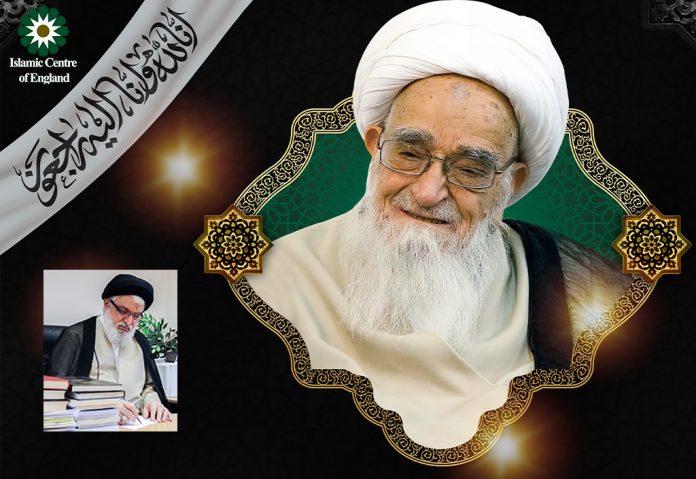 The Islamic Centre of England’s Director extended his sincere condolences on the departure of the Grand Ayatollah Lotfollah Safi Golpaygani (r.a) to our awaited Imam, the Leader of the Revolution  of the Islamic Republic of Iran, seminaries and Shi’a Muslims all the world over, especially the Iranian nation.

The entire Message of the Islamic Centre of England’s Director is as follows:

In The Name of Allah, The Most beneficent, The Merciful

‘Indeed we belong to Allah, and to Him do we indeed return. (Holy Quran, 2:56)
The passing away of the Godly scholar and monotheistic seeker, the Grand Ayatollah Lotfollah Safi Golpaygani (r.a), caused a feeling of great sorrow and grief to all Shi’as.
This Grand Marja’ was amongst the most prominent pillars of the Hawza of Qom, whose scientific, cultural and social services to Islam and Iran and the school of Ahl al-Bayt (a.s) are unforgettable.
His struggles with the oppressive regime, confronting with deviant sects, promoting the Jafari school all over the world, and accompanying and sympathizing with the great architect of the Islamic Revolution of Iran, as well as being the trustee and advisor to the Supreme Leader of the Revolution, formed a proud record for him which is full of the greatness of the Islamic world and the advancement of the school of Ahl al-Bayt (a.s).
I extend my sincere condolences of this significant loss to our awaited Imam, the Supreme Leader of the Revolution, esteemed Maraji’, Islamic seminaries, his disciples, his family, and the Iranian nation. I ask Allah to place him in the highest of the high ranks and grant his family the strength to bear this loss.
Seyed Hashem Moosavi
The Islamic Centre of England’s Director