HomeNewsSpecial NewsMagnificent Ceremony of the 43rd Anniversary of the Victory of the Islamic... 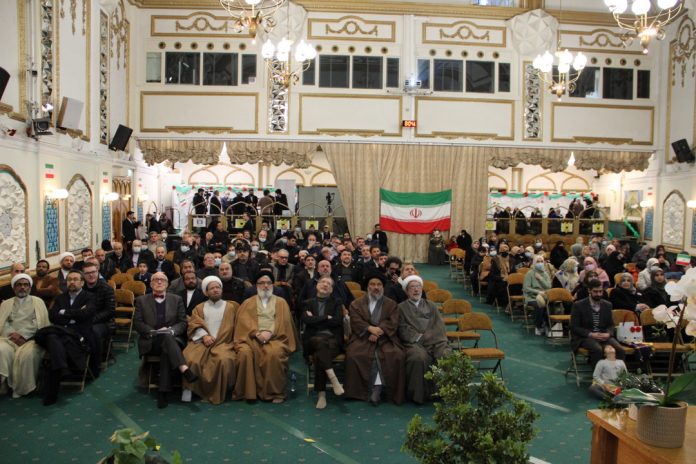 On the occasion of the 43rd anniversary of the victory of the Islamic Revolution of Iran, a glorious celebration was held on Friday night at the Islamic Centre of England with the enthusiastic presence of many individuals from various nationalities.

The ceremony began with the recitation of the words of God and then all those present stood in honour of the national anthem of the Islamic Republic of Iran and paid their respects.

Rodney Shakespeare, a British-Christian lawyer and writer based in London, was the second speaker at the event, who spoke about ‘Why the West is anti-Iranian and anti-Iranian’. He said: ‘The West hates the Islamic Revolution of Iran because Imam Khomeini offered a new style of governance based on Islam and justice to the world, and the enemies of the Islamic Revolution began negative actions against Iran for fear of spreading this ideology recalling the presence of dozens of US military bases around Iran, the imposition of war on the Iranian people and widespread sanctions’.

He added: “Justice was the central demand of the Iranian people during the revolution and this issue is an unforgivable sin for Westerners based on profit and usury.” Despite four decades of hostility from the West, the Iranian people have stood with pride and success, and this is an inspiration to the people of the world,” the British author said.

Following the ceremony, the Ambassador of the Islamic Republic of Iran to the United Kingdom, Mr. Mohsen Baharvand, in a speech on human rights from Imam Khomeini’s point of view, emphasized: The charters adopted are in line with international declarations. According to the Iranian ambassador to Britain, regarding retribution, Imam Khomeini (RA) also believed that, for example, retribution for the murderer is the right of the victim and his family, which is not observed in the West.

In this ceremony, HIWM, Seyed Hashem Moosavi, the Head of the Islamic Centre of England, in a speech referring to the great progress and achievements of the Islamic Revolution, said: one should be careful about the propaganda of the enemies because the purpose of this propaganda is disappointing the people. According to the head of the Islamic Centre of England, the Islamic community should learn from the fate of the people of the time of Imam Hussein (AS) who, under the influence of bad propaganda such as the separation of religion and politics, left their Imam of the Time (AS) alone and faced an unfortunate fate. He added: “Even today’s Imam of the Time (AJ), has introduced a representative or representatives, and has said that until I appear with the permission of God, you should follow the jurists who are introduced as the guardians of your affairs, so that he saves the ark of the great Islamic society from the terrible storms of the enemy’s attacks.

Hojjatul Islam Wal Muslimeen Moosavi, appreciated all those who try in any way to commemorate the memory of this great revolution outside of the Islamic Iran, and added: Celebrating the occasions related to the Islamic Revolution is one of the divine rites and includes a spiritual reward and is exactly a good example of fulfilling the order of Imam Khomeini (may God have mercy on him), who said “Support Velayat-e-Faqih so that your country is not harmed” and this refers to such acts.