Huge gathering celebrated the birth anniversary of Imam Ali (AS) 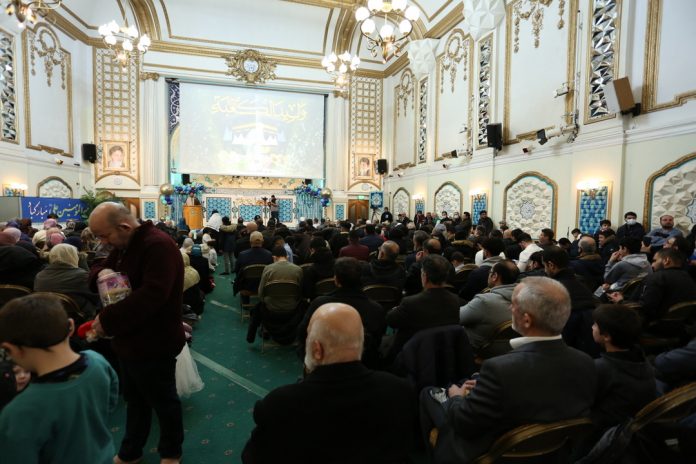 The Islamic Centre of England, was filled with the followers of Amir al-Mu’minin (AS) on Monday night 14th February 2022, celebrating his birth anniversary. It was one of the most memorable celebrations in the last 2 decades.

The Islamic Centre of England planned to hold this glorious ceremony a month ago to host the lovers of Amir al-Mu’minin (AS) on the night of Imam Ali’s birth anniversary, but the indescribable enthusiasm of Shiites living in Britain of different nationalities to participate in this ceremony was so great that the main hall of the centre was crowded before the ceremony began, and the guests, in order to express their devotion to Imam Ali (AS), were happy to attend the corridors, side halls and other places of the Islamic Centre of England to be able to benefit from the programme.

The ceremony began with the recitation of the Holy Quran and the broadcast of attractive joyful video clips on the event of birth anniversary of Imam Ali (AS). The reciters recited in three languages, Arabic, English and Persian, bringing more joys to the audience specially the famous song Ali Ali Moula. The performance of beautiful songs by the nasheed group of the Iranian School of London with the participation of male and female students increaced the variety and charm of this ceremony. The presence of women and teenagers in love with Imam Ali (AS) in this ceremony was more exciting than men. The scenery and decoration of the main hall, the display of tables full of flowers and the display of cultural and religious books, the display of teenagers’ activities in charity works, the face painting and the puppet show for children made the event more attractive for guests, especially for children.

In this ceremony, the winners of the competition, who were named Ali in the honour of Imam Ali (AS), received gifts from the head of the Islamic Centre of England HIWM Seyed Hashem Moosavi.

The head of the Islamic Centre of England, in a speech in English and Persian, pointed to the virtues of Imam Ali (AS) and stated: According to the verses of Qur’an, Amir al-Mu’minin (AS) is the best example for Muslims because in the Noble Quran the Prophet SAWA is known to be the best example for the mankind and also he is known to be same entity as Amirul Mu’menin(AS).

As the day number of the birth anniversary of Imam Ali (AS) in the month of Rajab is 13, he introduced thirteen categories and characteristics of the Commander of the Faithful Imam Ali (AS) which are considered as good examples for every Muslim.

HIWM Seyed Hashem Moosavi introduced him to be a role model of being a great young individual for the youngsters, a role model for the men in the world in being a good husband for his wife, a great role in asceticism for ascetics, in militarism for the militaries, in judging for the judges, in ruling for the rulers, in lecturing for the lecturers, in writing for the writers, in contentment for the poor people, in generosity for the rich people and in courgeness for the courage people.

In this ceremony, HIWM Seyyed Hashem Shabar also delivered a speech in Arabic. In his speech he said: ‘The whole life of the Commander of the Faithful, including his birth, courage, knowledge and asceticism, was accompanied by miracles.’

Regarding the virtues of the Commander of the Faithful, he added a narration from Imam Ali’s (AS): when I was a teenager, the Prophet (SAWA) raised me with him and I was so close to him that when he was revealed, I heard the voice of the angel of revelation.

The event was held with the participation of AIM and Ikhlas foundation.