HomeNewsSpecial NewsCelebration of the birth anniversary of three beloved ones in the Islamic... 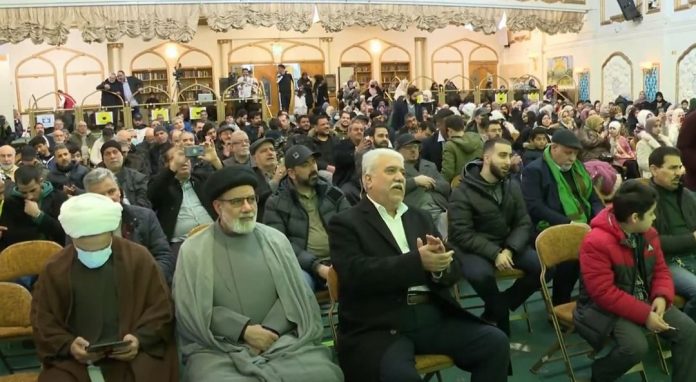 The birth anniversary of the three beloved ones had been celebrated in Arabic and English on the 3rd of Sha’ban at the Islamic Centre of England.

The celebration was taken place on the 6th of March 2022, the night of Imam Hossein’s birthday, where the praisers of Ahl ol-Bayt (PBUT) recited the Mawludi in Arabic and English.
In the Arabic part of the ceremony, HIWM Seyed Ghias Ta’meh, delivered a short speech, referring to a narration of Imam Sadegh (A.S), said: The custodian of Muslim affairs should be a scholar and aware of his time so that doubts do not invade him.

He mentioned that, the awareness of time was one of the characteristics of both Imam Hossein and Imam Sajjad (A.S) as well as all other infallible Imams (PBUT). Moreover, he added that: Ayatollah Khamenei, the leader of the Islamic revolution has identified many threats against Iran and nullified them all.

In the English part of the ceremony, HIWM Ghasemi had delivered a speech stating that: the divine victory in this world and the hereafter are for prophets and believers. He also added that: divine victory on the Day of Judgment means that God will enable the prophets and believers to intercede any number of people who they wish to and victory in this world always means the permanence of the message, goal and lifestyle of these noble ones.

Furthermore, he mentioned: Seyed Qutb, one of the Sunni scholars in praise of Imam Hussein (A.S) has said that despite the misconceptions of imprudent people regarding Imam Hossein (A.S), I believe that he is the victorious universe and the beloved of Shiites and Sunnis.

HIWM Ghasemi also explained the difference between the leadership style of Imam Hossein and Imam Zayn ol-Abedin (PBUT). Imam Sajjad (A.S) informed the people about the corruption of the ruling system by talking to his God. This style of leadership can be a model for our lives today. Likewise, he added that the leader of Iran has emphasised the necessity in explaining the doubts by answering them very well and he also considered it as a public duty.

Celebration of the birth anniversary of three beloved ones in Persian language will also be held on the night of the birth of Hazrat Abolfazl Al-Abbas (A.S) in the Islamic Centre of England.