HomeNewsSpecial NewsMessage of Condolence from the Director of the Islamic Centre of England... 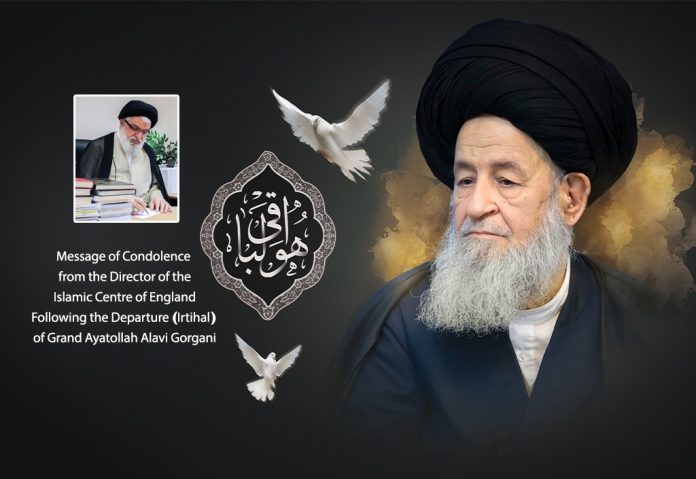 HIWM Seyed Hashem Moosavi, the Director of the Islamic Centre of England, expressed his condolences on the departure of the pious and high-ranking jurist, Ayatollah Haj Seyyed Mohammad Alavi Gorgani, and asked the Almighty Allah SWT for reward from Allah SWT for the family members of this great individual.

The text of the message of condolence of the director of the Islamic Centre of England is as follows:

In the name of God

If a scholar passes away, there is nothing to compensate it until the day of judgement.

The wafat of the pious scholar and wise jurist; the Grand Ayatollah Haj Seyyed Mohammad Ali Alavi ‌ Gorgani ‌RA‌ was a great loss for the Shiite community and the followers of Ahl al-Bayt (as).

He was one of the pillars of knowledge and guidance and one of the leading authorities of the seminary of Qom and one of the great individuals of the Shiite seminaries and without a doubt his influential position in guiding scientific and cultural figures has had an important effect on the dynamics of religious activities in recent decades.

I offer my condolences to the Baqiyatullah Al-Azam Imam Zaman AJ, the Leader of the Islamic Revolution, the great Maraji Taqlid, seminaries, especially the seminary of Qom and his family members, as well as the honourable people of Iran. I ask the Almighty Allah SWT, to grant him nearness to Him, and to give his family members a beautiful patience and a great reward.

Director of the Islamic Centre of England