HomeNewsSpecial NewsCelebration of Birth Anniversary of Imam Mahdi A.J. & Nowruz for the... 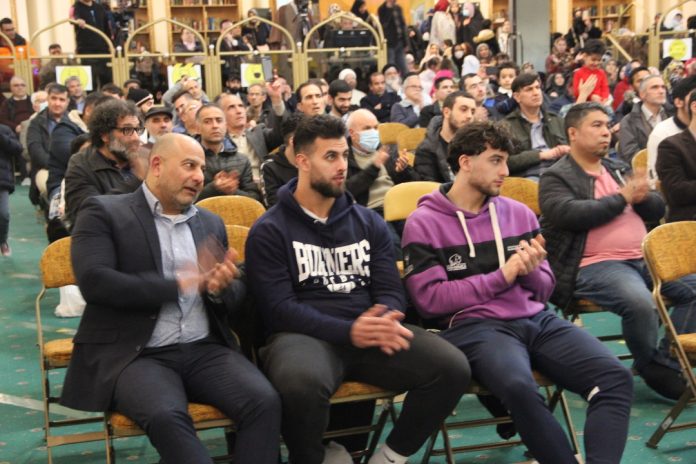 This year’s 15th Sha’ban was celebrated more gloriously compared to the previous years.

This year’s 15th Sha’ban celebration was celebrated prior to Nowruz 1401. As the spiritual spring and the seasonal spring were parallel this year, the Farsi-speaking communities living in London who participated in this event enjoyed it more. This ceremony took place on the 18th March 2022 and the program included a performance of juggle tricks, three beautiful nasheeds in three different languages presented by students from the Iranian school. Two poets read their poems and the display of different video clips relevant to Imam Mahdi A.J. and Nowruz added to the warmth of the programme. Recitation of the supplications and the lectures increased the attraction of the event. In this programme a number of children taking part in the competitions, Quran teachers, and those who were named Mahdi or Narjis received gifts from the director of the Islamic Centre of England.

He gave an example that one of the signs of the return of the Imam is that oppression will spread around the world and added that nobody should oppress others to prepare for the conditions of the Imam’s reappearance because this would be contradictory to the discipline of the religious individuals.

The director of the Islamic centre of England added, obeying our leader who is the representative of our infallible Imam of the time AJ is considered to be a characteristic of those who are pious and waiters of the Imam. He further added that the same way some people oppose the representative of Imam Mahdi AJ in his occultation they will also oppose Imam Mahdi (as) after his reappearance.

At the end, he recited a narration from Imam Sadiq (A.S.) conveying the fact that after the reappearance of Imam Mahdi AJ, he will face so much pressure and hardship from the people of his time that his difficulties will not be less than those of the prophet of Islam (SAWA).