HomeNewsSpecial NewsThe director of the Islamic Centre of England: The current incidents in...

The director of the Islamic Centre of England: The current incidents in the world have revealed some of the signs of the advent of Imam Mahdi A.J. 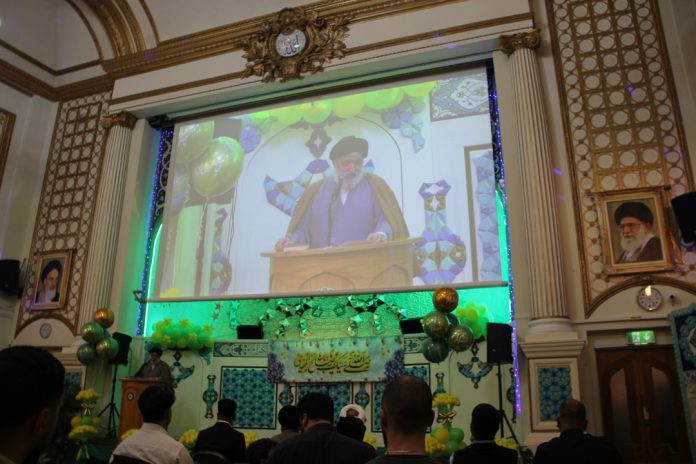 In a ceremony held at the Islamic Centre of England for the celebration of the birth of Imam Mahdi A.J. and the ancient Persian Festival; Eid-e-Nowruz, the HIWM Moosavi said: The current situation of the world is ready for the arrival of the saviour of mankind and people must be ready for his reappearance. In this ceremony, which was held on March 17, 2022, in both Arabic and English languages at the Islamic Centre of England, HIWM Seyed Hashem Moosavi in a speech in English added: There are many narrations about the advent of Imam Mahdi (AJ) mentioning the conditions for his reappearance some of which are the existence of faithful and devoted believers and the acceptability of Imam Mahdi for the people of the world. The head of the Islamic Centre of England considered the existence of a plan for the establishment of justice and the presence of purified and obedient followers of Imam Mahdi A.J. to be two necessary conditions for the advent of Imam Mahdi A.J. and added: The Almighty Allah does not change the status and destiny of any nation unless they change it by their own hand. HIWM Sayyid Qasim Jalali, another speaker of this ceremony, in a speech in Arabic, named some of the duties of those awaiting the advent of Imam al-Zaman A.S. and said: The waiters of Imam Mahdi A.J. must know their Imam and then introduce him to the world. He considered the knowledge of the name and position of the Imam of the Time AJ necessary for knowing him and added: Anyone who dies without knowing the Imam of his time has died as if he didn’t have any faith. In this celebration, nasheed circles in different age groups, including children, teenagers, and young people, had the greatest share in making the programme more attractive. Other parts of the ceremony included playing videos of the Leader of the Islamic Revolution and prayers. The decoration of the main hall of the Islamic Centre of England doubled the attractions of this glorious celebration. Lovers of the Ahl al-Bayt A.S. from different nationalities participated in the ceremony, and also a special entertaining workshop was held for the children on the side of the ceremony.

Photo Gallery of the Celebration for the Birth Anniversary of the Imam Mahdi A.J. at the Islamic Centre of England