HomeNewsSpecial NewsThe Ritual of Cleansing and Perfume Spraying at the Islamic Centre of... 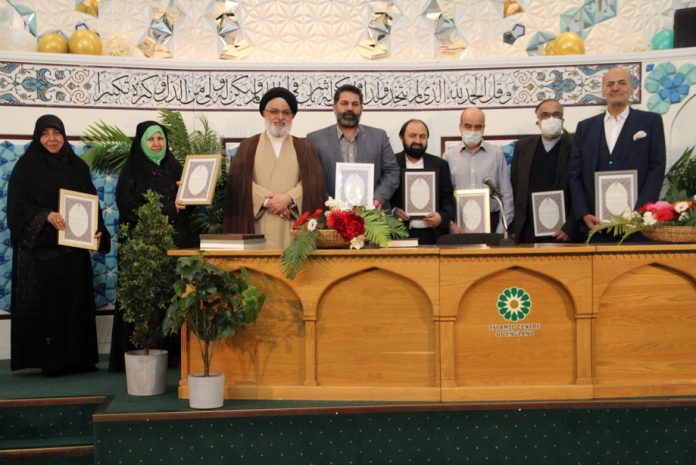 Before the beginning of the holy month of Ramadan, the Islamic Centre of England held a Cleansing ceremony in the presence of a group of well-wishers in order to honour the tradition of cleansing the mosques.

The tradition of cleansing the Islamic Centre of England is being held for the second year on the last ten days of the month of Sha’ban. This ritual was held last year in accordance with the health regulations regarding Coronavirus, but this year the presence of a number of well-wishers along with the staff of this centre made this ceremony more spiritual were a number of well-wishers and donors also received a letter of appreciation from HIWM Seyed Hashem Moosavi, the director of the Islamic Centre of England.

The director of the Islamic Centre of England in his speech stated that: In both Quran and narrations of the Infallibles (peace be upon them all), much emphasis has been placed on the cleanliness of mosques and this ritual is a good opportunity for everyone to attend the feast held by the Creator of the universe in the month of Ramadan. He also added: according to the great Prophet of Islam (SAWA), the mosque is the place for Prophets and also is the home for the pious people.

HIWM Moosavi mentioned that the Islamic Centre of England has been doing this ceremony for two years in such occasion aiming to clean and honour the last ten days of the month of Sha’ban. Moreover, this year at the same time in the ceremony, we tried to thank the well wishers who always participated in the religious affairs and charity purposes at the Islamic Centre of England in the last year.

He also thanked and honoured all those who are involved in the development of mosques and religious activities. Furthermore, he mentioned that according to verse 18 of Surah Tawbah in the Holy Quran, there are only certain people who succeed in making mosques and according to a prophetic hadith, ONLY whoever God loves will be given the honour of serving the mosque.

At the end of the ceremony, the participants cleaned and perfumed the Islamic Centre of England while some poems in the merits of mosques and its value in Islam were recited which created more spirituality at the event.