The 34th annual summit of Islamic Scholars, Imams and directors of Islamic centres across the UK in London 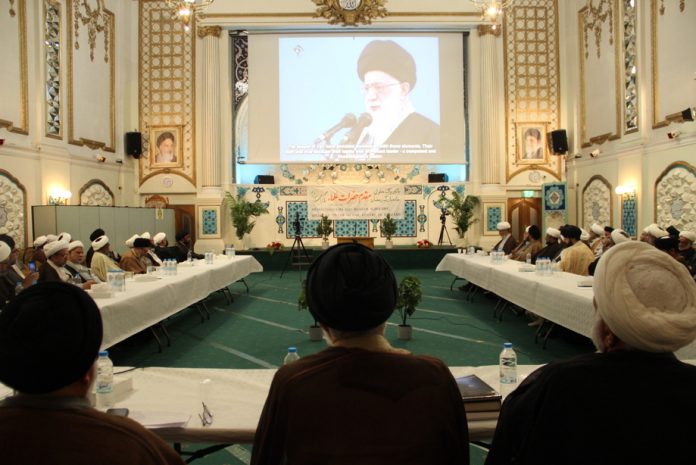 The Islamic Centre of England hosted The 34th annual summit of Islamic Scholars, Imams and directors of Islamic centres throughout the UK
In this summit, in which prominent religious figures and Muballighin from different cities across the UK, HIWM Seyed Hashem Moosavi, the Islamic Centre of England’s Director, thanked the scholars Muballighin who participated in the meeting, emphasizing the need for Muballighin to be vigilant in maintaining unity. He then continued that Muballighin should specify the Quranic doctrines as a road map: the further we deviate from the road map, the further we separate from the path of guidance. The Islamic Centre of England’s Director presented a report on the activities of the Hawza Ilmiyya of England in both quantitative and qualitative progress trends. He said: “Currently, 60 students are studying in this Hawza in the first and second grades and based on our surveys, The demand for education in the Hawza in this country is very high, but unfortunately, our facilities are limited, and our needs are significant.
He said: “I hope that each of the scholars and preachers will be able to contribute to the expansion of the Hawza activity in this country as much as possible.” HIWM Moosavi also paid tribute to the high spirits of all deceased scholars and jurists in honour of the memory of the late Ayatollahs Safi Golpayegani, Alavi Gorgani and Rey Shahri.
This knowledgeable gathering was very well received by scholars, Muballighin and directors of Islamic Centres. More than 14 articles were accepted to be presented at the summit, some of which were read in the conference hall, and others will be published in the future.
Ayatollah A’rafi, the Hawza Ilmiyya of Iran’s Director, stated in a visual speech, referring to the complexities and difficulties of the missionary (Tableegh): problems in managing beliefs and thoughts, mixing modern life with the controversies of the new age, apostasy and spirituality, and diversity. Invitations and presuations of the attacker are amongst the challenges of religious missionary and training, in the face of which sincerity, immateriality, love of guidance, perseverance and trust in God, patience, study and increase knowledge-wise ability, improve skills, strengthen social relations and Good company, situational awareness and staffing are among the necessities and to face these challenges.

HIWM Alemi, the Director of the Islamic Universal Association, referring to different types of life in the Qur’an, said: Vegetable, animal, human, good and eternal life are among the lives mentioned in the Qur’an, which are generally divided into two categories. Accepted and denied.
He added: The life for which the great Prophet of Islam (PBUH) and the Ahl al-Bayt (a.s) struggled for is acceptable life, but above the acceptable life is eternal life, which in the Qur’an is attributed to the status of martyrs. HIWM Alemi also referred to some criticisms about the lack of attention of the Ahl al-Bayt (a.s) followers to the Holy Quran and said: “After the Islamic Revolution of Iran, this challenge has largely decreased due to the expansion of Quranic activities.”
HIWM Keshmiri, the representative of Grand Ayatollah Sistani in Europe, was also a speaker at the summit, emphasizing the importance of reciting, contemplating and practising the Qur’an as a cure for sick hearts: Many exegetes have interpreted the Qur’an, but many of them They have not understood the Qur’an.
HIWM Keshmiri stated: “Despite some differences in methods and tastes, there is no fundamental difference between our scholars, and we all have the necessary assistance and like-mindedness.” On the threshold of the holy month of Ramadan, he referred to the famous sermon of the great Prophet of Islam (PBUH). He emphasized: Religious scholars and preachers should understand the youth and encourage them to understand and memorize the Qur’an and hold competitions and various forms of Qur’anic attractions for the young generation by teaching them the love of the Prophet of Islam (PBUH) and his family (a.s) and the recitation of the Qur’an.
HIWM Sheikh Hassan al-Toraiki, one of the active cleric figures in the field of Tableegh in the UK, said in a part of his article, referring to the duties of missionaries, as there is a process in diagnosing and treating disease. Everyone does his duty in Tableegh of Islamic thinkers who have also produced knowledge, and Muballighin are obliged to publish thinkers’ intellectual products instead of their thoughts and opinions.

HIWM Ghulam-Hur Shobeiri, Imam of al-Zahra Foundation in Nottingham, in presenting his article referring to the concept of divine life, said: From the Qur’anic point of view, there are two views on life, one is a materialistic view and the second is a divine view of life. Our task is to emphasize the avoidance of materialism and approach to the divine view of life.
HIWM Mirza Abbas, the Hawza Ilmiyya of England’s internal manager, also said in the meeting: “Spirituality is a treasure that must be sought and experienced.” He added: The Hawza of England has tried to provide the necessary spiritual atmosphere for those who are interested in studying religious sciences. While explaining the programs of the Hawza, the internal manager of the Hawza Ilmiyya of England presented a report on the activities of the seminary and the plans of the Hawza to the participants.
At this summit, several videoclips of the statements of Imam Khomeini (r.a) and the esteemed Leader of the Islamic Revolution of Iran regarding the significance of Tableegh and the duties of religious missionaries (Muballighin) were screened.