HomeNewsSpecial NewsCongregational prayers, heartfelt acts of worship and a mourning ceremony were held...

Congregational prayers, heartfelt acts of worship and a mourning ceremony were held on the second Night of Qadr at the Islamic Centre of England 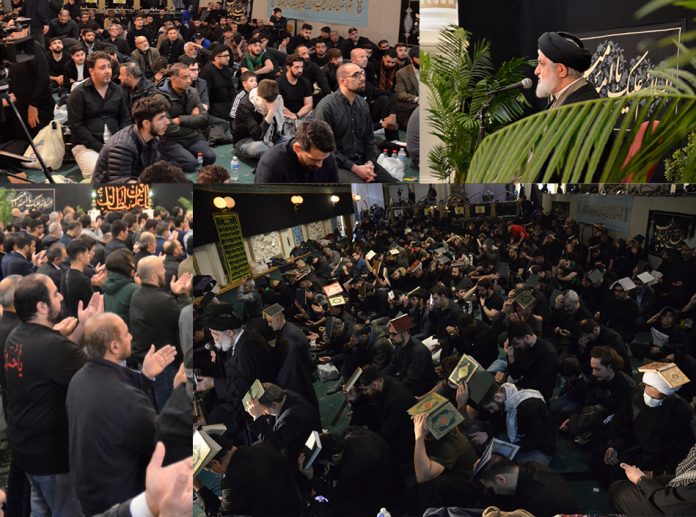 The second night of Qadr and martyrdom of Amir al-Momenin Imam Ali (AS) were commemorated by the presence of the believers from different nationalities at the Islamic Centre of England.

In this spiritual ceremony which was held on Friday night, April 22, 2022, the lovers of Imam Ali (AS) gathered from far and near on the second night of Qadr at the Islamic Centre of England and commemorated this occasion by staying awake until morning and supplicating with their Lord; Allah SWT and mourning for the martyrdom of the first martyr of Mihrab; Imam Ali Alayhessalam.

In this programme which was held on the twenty-first night of the holy month of Ramadan 2022, which began after the Maghrib prayer and the feast of breaking the fast, the believers prayed Qadha prayers, benefited from the recitation of the supplication of Jowshan Kabir, the recitation of the Qur’an, speeches and azadari in both English and Farsi and they asked Allah SWT to destine them with the best of the destinies in the following year by holding Qur’an on their heads and calling the name of Allah SWT and the Infallibles.

HIWM Seyed Hashem Moosavi, the director of the Islamic Centre of England, spoke to a large crowd of mourners attending the programme and referred to the virtues of the nights of Qadr and Amir al-Mu’minin AS and said: ‘Staying awake at the Night of Destiny and honouring these spiritual rituals has many blessings. Recalling the tradition of the Infallibles (peace be upon them), including Lady Fatima SA, the daughter of the Holy Prophet of Islam SAWA in the effort to revive the Nights of Destiny, he asked all believers participating in this ceremony to follow the Prophet SAWA and his progeny in honouring these good traditions and also in teaching their children to do so.

The head of the Islamic Centre of England added: “Laylat al-Qadr is the highest night of the year in the Islamic culture and its value is higher than thousand months, and according to a narration from the Holy Prophet of Islam, very high virtues are allocated to that night for the Muslim nation that has no precedent in previous nations.

During the last part of the programme while holding the Qur’an on their heads, the reciter of the Qur’an recited Surah Ar-Rahman when the name of Imam Ali Alayhessalam was called and recited the poems about the orphans of Imam Ali Alayhessalam when the name of lady Fatima SA was called and this increased the spirituality of the programme.

At the end of the ceremony, the attendants started their fast after eating Sahoor in the blessed feast of Amirul Mumenin.