HomeNewsSpecial NewsWhat is the amount of zakat al-fitr and Kaffarah for breaking the...

What is the amount of zakat al-fitr and Kaffarah for breaking the fast in 2022? 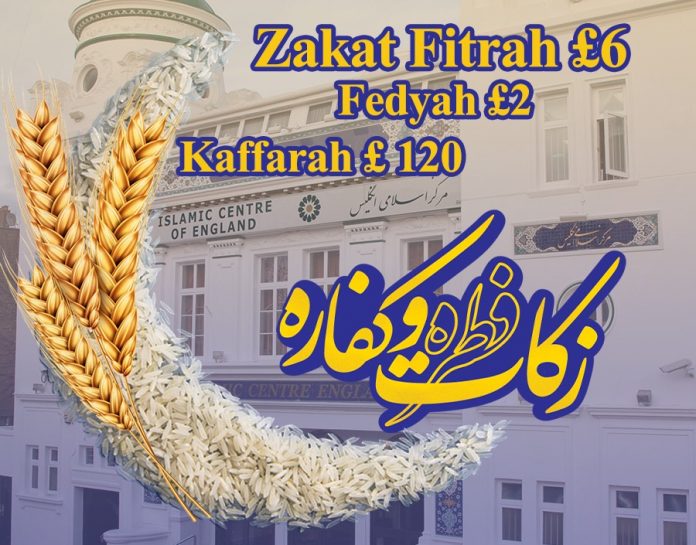 The Islamic Centre of England, wishing acceptance for the worshiping acts of the fasting believers, announced: The amount of Fitreyyah for each person is at least £6, the Fidyah is at least £2 per day and the amount of breaking the fast intentionally is at least £120 per day.

According to the Islamic Centre of England, Zakat al-Fitr this year is paying three kilograms from one of wheat, rice, corn, raisins and dates.

According to this report, believers can pay something more than the specified amount as a precaution to ensure that they have done their duty.

Believers who wish to pay their Fitreyyah or Kaffarah through the website of the Islamic Centre of England do not have to enter their name, email or mobile number.

What is Zakat al-Fitr?

There are two types of zakat: financial and physical. Financial zakat is given to special types of income under special conditions, and physical zakat is the zakat al-fitr, which is one of the obligations and necessities of Islam for Muslims who are able to pay it.

When should Fitreyyah be paid?

It is obligatory on a person who is sane, mature, needless and conscience at the Maghrib of the night of Eid al-Fitr, to pay three kilograms of his or her dominant daily food (usually the most important dominant food at the moment is wheat or rice) or its equivalent in cash to the poor as a religious tax.

The time for paying Fitreyyah is from the Maghrib of the night of Eid al-Fitr until before the Eid al-Fitr prayer. If it is not possible to pay it at this time, it is obligatory for him or her pay it to the poor whenever possible by the intention of nearness to Allah and without the intention of Ada or Qadha.

Believers who wish to set aside the amount of Fitreyyah before allocated time for paying it can deposit the desired amount in the Zakat account of the Islamic Centre of England so that they would pay it on their behalf in the proper time. The reference should be Sadat if the payee is Sadat and Non-Sadat if the payee is Non-Sadat.

If you want to pay in person, you can put the desired amount in the envelope and write the reference on the envelope as explained for the bank transaction and give to the reception of the Islamic Centre of England.

What is a Fidyah?

(Kaffarah for Breaking the Fast for the Justified Reasons)
A Fidyah is an Islamic tax that is obligatory on six groups of people who are allowed to break their fast, but they must give at least 750 grams of wheat or a portion of their daily food, such as wheat, rice and etc. or its equivalent in cash to the needy people.
Those who do not have access to the poor must pay Fidyah through a trusted person or institution that has access to the poor people. Representatives of the Maraji Taqleed have set Fidyah to be at least £2 per day for the believers living in the UK.
Since the usage of Kaffarah and Fidyah is same, while paying Fidyah online, please use the Kaffarah button.

The following categories are the individuals who are allowed to break their fast in the month of Ramadhan but they should pay Fidyah.

1) A pregnant woman who is about to give birth and there is a possibility of harm to the baby.
2) A breastfeeding woman who, if she fasts, her milk supply is reduced and there is a risk for her child.
3) Old ladies and gentlemen for whom fasting is hard and difficult.
4) A person who did not fast during the previous Ramadan due to illness and his or her illness has continued until the current Ramadan.
5) A person who has missed some days to fast since the month of Ramadan last year and has not performed its qadha until the month of Ramadan this year without a religious reason.
6) Someone who has a disease that makes it very difficult for the believer to tolerate thirst.

What is the Kaffarah (Penalty) for breaking the fast intentionally?

The Recompense (kaffārah) for breaking a fast (ifṭār) unlawfully in the month of Ramadan WITH A HALAL CAUSE is that the person must fast for two months in accordance with the instructions that is mentioned in the jurisprudential books of the Maraji Taqleed, or feed sixty poor people (fuqarāʾ).

However, if this happens with A HARAM CAUSE, then one must fulfil both recompenses (Kaffarah Jam’).

To pay online for all the above mentioned causes please use the account details below:

Alternatively you can pay by PayPal using the link below: