HomeNewsICEL NewsAwarding Certificates of Quranic Courses of Tajweed 1 and 2 at the... 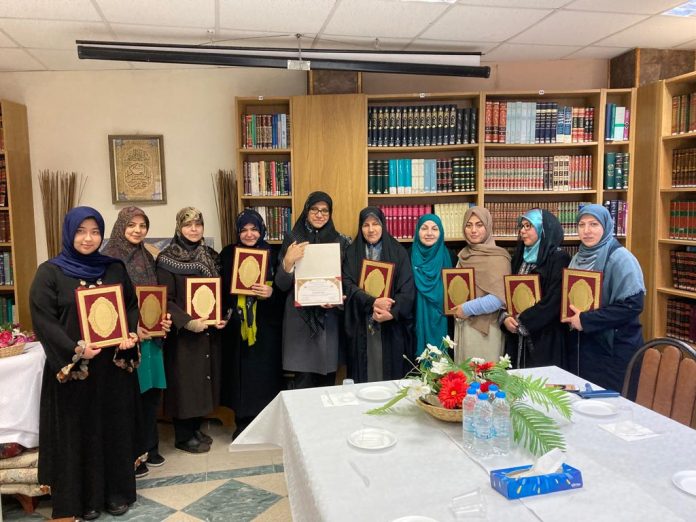 Students and teachers of Quranic courses at the Islamic Centre of England received their certificates after completing 1st or 2nd level of Tajweed course.

In the ceremony held for awarding the certificates to the graduates of Tajweed Courses, HIWM Seyed Hashem Moosavi, the Director of the Islamic Centre of England said, “Studying Qur’an and religious sciences have no ending. The end of these courses is the beginning of new and advanced courses and skills in the service of the Qur’an”.

The director of the Islamic Centre of England added, “The level of piety is not assessed by long bowing and prostration in prayer, but trustworthiness can identify the status of piety”. He added: “The children of the believers, are a trust from the people and Allah SWT, and the criterion of your religiosity and trustworthiness in this regard depends on the amount of your attention and effort in educating the students.

HIWM Moosavi then referred to the advice of the Leader of the Islamic Revolution in a meeting with Qur’an reciters. He advised them to be memorisers and protectors of Quran and stated, “If you teachers can also act as protectors of the Qur’an, you are an instrument of Allah SWT because He is the Protector of the holy Qur’an and you are His instrument for the protection of the Quran”.

Tajweed 1′ and ‘Tajweed 2’ training courses are held in Tebyan School after the two-year introductory stages. These include Arabic, Islamic rulings and recitation of the Quran. Each of them is held for two years. In this ceremony, the memory of the late Dr. Ramadan Awsi, the late director of the Tebyan School of the Islamic Centre of England, was honoured.