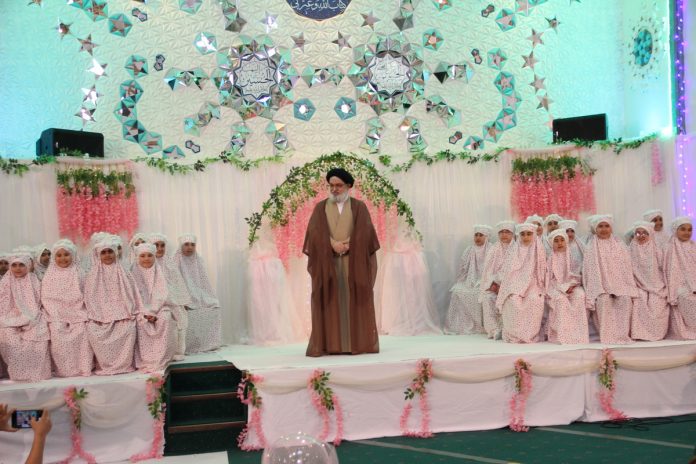 Scores of teenage girls celebrated their Islamic coming-of-age in the Islamic Centre of England. This celebration was held on the 22nd of May 2022 with the presence of many new Quran learners and their parents and teachers. During this ceremony, various cultural and educational programs were performed.
HIWM Seyed Hashem Moosavi, The Islamic Centre of England’s Director, explained the concept of the religious duty of boys and girls and the necessity for understanding the correct paths of life, addressing the parents and educators: Do not provide the cause of boredom from religion among newcomers.
HIWM Moosavi considered the existence of intellect and the sending of prophets as two divine blessings for human salvation and added: Accurate performance of duties and abstinence from prohibited actions are among the responsibilities that ensure human salvation. Accordingly, circumstances should be provided so that adolescents and newcomers can gradually become acquainted with the Islamic rules in general and the rules related to boy-girl relations in particular.
He considered the celebration of Islamic coming-of-age as one of the examples of thanksgiving to the Creator. It is to be worthy of receiving divine commands mentally and physically. HIWM Moosavi, referring to the importance of gratitude, asked girls and boys who had reached the Religious coming-of-age to perform the prostration of thanksgiving for this divine gift and seek refuge in God Almighty from Satan and do not forget to help the needy people and give alms.

Quran recitation, performing hymns, reciting poems, and passing attendees under the Quran as the only guide to human salvation were among the special programs of this celebration. And then, 31 girls read the religious coming-of-age oath in a spiritual atmosphere. At the end of the ceremony, the Director of the Islamic Centre of England presented gifts to the primary attendees.