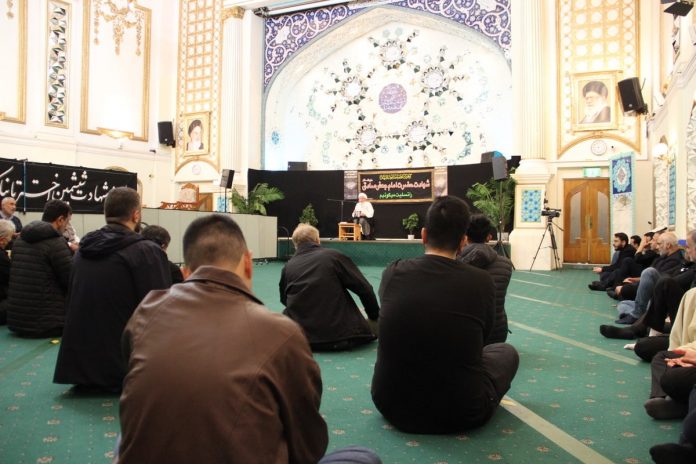 On the occasion of the martyrdom anniversary of the sixth Imam, a commemoration ceremony was held in the Islamic Centre of England with the presence of the lovers of Ahl Al-Bayt (A.S) in three languages for two days.

The ceremony commemorating the martyrdom of Imam Sadiq (A.S) in Arabic was held on Thursday night, May 26, 2022 and HIWM Saeed Khalkhali said in his remarks about the foundation of Shi’a jurisprudence during the time of Imam Sadiq (A.S): “The spread of Shi’a faith during the time of the Sixth Imam was more than other infallibles and therefore this Imam had a special position among all Imams in terms of spreading knowledge”.

He also added that: Imam Sadiq (A.S) always emphasised on the good communication, respect and paying visit to Sunni brothers and according to him: “Any Shi’a with his/her good or bad behaviours and morals can be a source of honour or disgrace for the infallible Imams (A.S).

In the English section of the ceremony, HIWM Mirza Abbas, in his remarks after describing the history of the graves in Baqi’ Cemetery, emphasised that: “Shiites should participate in the reconstruction of the shrine of Imams of Baqi’ in order to make a contribution to the reverence and commemoration of the four infallible Imams buried in there”.

He added: Imam Ja’far Sadiq (A.S) was one of the best in the field of science, and any Shi’a person can be considered as a follower of Ahl Al-Bayt (PBUT) by studying any beneficial science.

In commemoration of the anniversary of the martyrdom of Imam Sadiq (A.S) on these two nights, eulogies about the Ahl Al-Bayt (AS) were recited in Arabic, English and Persian.