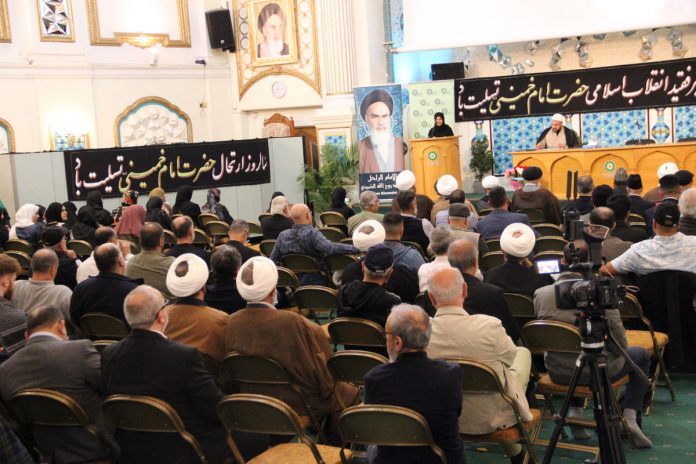 Commemoration of the 33rd Imam Khomeini’s (r.a) departure anniversary was held in the presence of Muslim thinkers at the Islamic Centre of England. In this ceremony, which was held on the 7th of June, 2022, coinciding with the 17th of Khordad, 1401, with a broad welcome of the lovers of Imam Khomeini and the Islamic Revolution, the speakers spoke about the pure Muhammad (SAW) Islam.

Sheikh Nabil Awan, an Islamic scholar, was the first speaker at the event to speak about the character of Imam Khomeini and the impact of the ideas of the founder of the Islamic Republic of Iran on the world and the Islamic Awakening.

Subsequently, a video clip of the recitation of Imam Khomeini’s divine-political will was broadcast.

Ms Janan Abdullah, a religious activist from Bahrain, spoke about Imam Khomeini’s personality and practical lessons, adding: “Imam Khomeini wrote letters to his family members that contain many moral and spiritual points that we can also be addressed.” Saying that the Islamic Revolution led by Imam Khomeini changed the way of the world, she said: “the Pure Muhammad (SAW) Islam is a religion in which its leader, like Imam Khomeini (r.a), considers himself dependent on the power of God and sees himself as humble before Allah and the people, so reading his written works is valuable and influential for everyone.

Dr Sayyid Enayatullah Andrabi, a Muslim thinker from Pakistan, another speaker at the ceremony, said: “When we talk about Imam Khomeini (r.a), we are talking about a noteworthy topic.”

He added: “the Pure Muhammad (SAW) Islam, which every Muslim group claims to represent and is willing to sacrifice its life for its claim, in our opinion means bringing Islam to the social and political life of the people.” He said: “With this in mind, Imam Khomeini (r.a) wrote a new chapter in the book of the history of humanity and believed in a new expression of Velâyat-e Faqih (Guardianship of the Islamic Jurist), but the jurist can even prohibit Hajj based on expediency, which is an undeniable obligation.”

In this part of the gathering, a video clip of Imam Khomeini’s funeral was played. Then Fatemeh-Ala, an Iranian student living in London, declaimed a text regarding the role of Imam Khomeini (r.a) in reviving pure Muhammad (SAW) Islam.

Following the gathering, Sheikh Abdullah Obaid, another thinker and speaker at the meeting from Lebanon, quoted Professor Woodward as saying of Imam Khomeini: “The New York Times sent me an article during the Saddam’s invasion of Iran to Iran control that article.” I was asked to travel to Iran to see what kind of personality Imam Khomeini (r.a) is. I wanted to have an interview with the Imam, and finally, I was allowed to go to Imam Khomeini’s very simple Husseiniyah and attend his speech. “Based on what I heard, I expected to meet someone who is the creator of terrorism,” he said. When I went to his Hosseiniyah and saw that very simple (free from luxurious items) and a friendly atmosphere, my pessimistic view of him completely changed because he is someone who, if I wanted to compare someone to Christ, I would compare to. I felt that I wanted to be with the people. Long live Khomeini! “I did not know why I could not stop myself from crying,” he said. Dr Mohammad Khalid, an Islamic scholar living in England, was another speaker at the ceremony. He said: As a historian, I say that Imam Khomeini was the only leader who was able to win a revolution without any military, and the pure Muhammad (SAW) Islam was a slogan that Imam Khomeini (r.a) implemented.

Then a  video clip of Imam Khomeini’s will was broadcast.

At the end of the event of HIWM, Seyed Hashem Moosavi, the Islamic Centre of England’s Director, in a speech of condolence on the occasion of the 33rd anniversary of Imam Khomeini’s passing away, talked about the factors that shape the concept of the pure Islam. He said: there is no doubt that those narratives of Islam that do not say a word to defend the oppressed and help the oppressed can not represent the pure Muhammad (SAW) Islam. He added: Imam Khomeini, during his life, defined the concept of pure Islam as opposed to American Islam, and if a narrative of Islam accepts oppression or leaves the oppressor oppressing the oppressed and does not think of confronting the oppressor and helping the downtrodden, That Islam is neither pure nor authentic.

The Islamic Centre of England’s Director added: “Another essential component of the pure Islam is Islamic unity, and as it is mentioned in the Holy Qur’an, the lack of unity will destroy the power of society.” HIWM Moosavi stated: The Islam that Imam Khomeini (r.a) introduced to human society, along with fighting against the superstitious understanding of Islam, was a narrative of Islam that considered unity necessary for the society because defending the rights of the oppressed, confronting arrogance and establishing the day al-Quds day was one of his historical views that will remain forever and introduce the pure Islam, and this was the wish of all the prophets.

The keynote addresser of this event stated that: Today, there are groups on both sides, Shi’a and Sunni, who have endangered Islamic unity; Some in the name of defending the Prophet consider an insult to the Shi’a sanctities permissible, and some in the name of protecting the Ahl al-Bayt (a.s) insult the Sunni sanctities. These are both equally dangerous, while we have learned from Imam Khomeini (r.a) to stay away from both extremist groups.