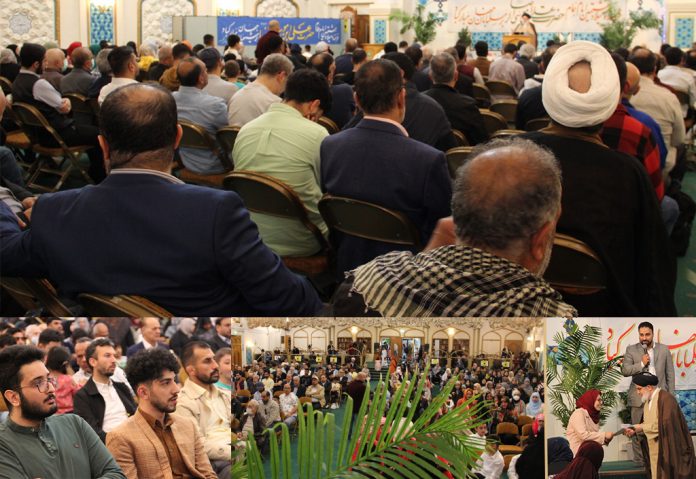 The celebration ceremony of the birth anniversary of Imam Ali ibn Musa ar-Reza (AS) was held in the Islamic Centre of England on Saturday, 11th of June 2022. The ceremony commenced with a beautiful recitation of the Holy Quran, followed by a series of enlightening speeches in the three languages of English, Arabic and Persian.

Several nasheed artists had also blessed the gathering with the recitation of illustrious poetry in praise of the eighth Imam of the Shi’i faith, the lonely Imam of Khorasan.

HIWM Seyed Hashem Moosavi, the director of the Islamic Centre of England cited one of the most famous narrations from Prophet Mohammad (PBUH), in both English and Persian, “If a person dies while s/he does not know the Imam of her/his time, s/he will die a death of ignorance”. He continued, “following the infallible Imams (PBUT) is the guidance of humankind and this following is based on knowing them first.”

The Director of the Islamic Centre of England further added that Imam Reza (A.S) is a beacon of guidance for humanity and the saviour of those who is in despair. He also added, that simply being aware of the existence of the Imam is not enough to be safe from misguidance.

HIWM Moosavi referred to the saying of the late Ayatollah Bahjat (R), who had responded to those who insisted on seeing the Imam of the time and said, “It is not enough to only see the Imam of the time, many misguided people had seen the Imam of their time, who were in the presence of Imam, saw the Imam closely. Gaining an enlightened understanding of the Imam (a.s) is what is important”.

The Director of the Islamic Centre of England reiterated that according to verse 71 of Surah al-Isra, people will be raised on the day of judgement with their ‘Imams’, thus the Holy Quran affirms the role of the Imam’s leadership in ensuring prosperity for the believers.

HIWM Ali Massoud, the Arabic lecture speaker, pointed to the luminous teachings of the Holy Prophet’s household (PBUT) and the virtues of Imam Reza (A.S), and said, “during the difficult times of the Abbasid government and the political activities of the Alawite, Imam Reza (A.S) led the society which went through an excruciating period in the path of Imamate.”