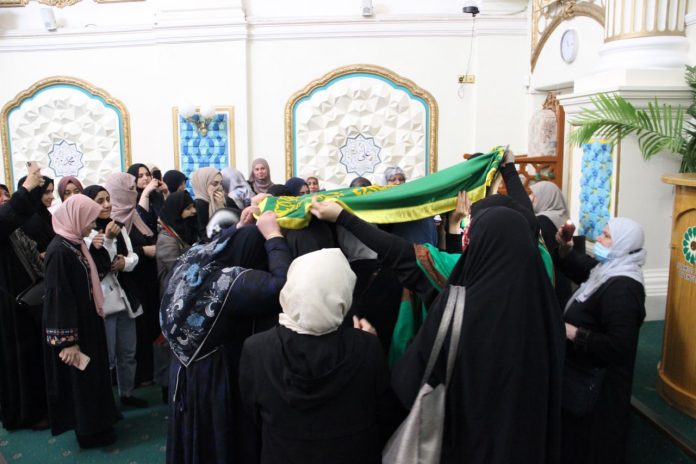 Several Imam Rida (a.s) lovers came to London to be blessed by the spiritual fragrance of this sacred flag.
The first session with the blessed flag of Imam Rida (a.s) was held after the noon prayers yesterday, June 16. In the presence of the Director of the Islamic Centre of England, the second spiritual ceremony and blessing of the Razavi perfume last night after Maghribain prayers and the recitation of Kumayl Du’a and the third was held this morning, Friday, June 17, after the recitation of the al-Nudba supplication. On all three occasions of this ceremony, beautiful and attractive music videos such as special Ziarat of Imam al-Rida  (a.s) were played and were enthusiastically welcomed by attendees. The green flag of Imam al-Rida (a.s) made the atmosphere of the Islamic Centre of England fragrant.
In these spiritual ceremonies last night and today, Ahl al-Bayt (a.s) praisers in Arabic and Persian praised chanting, and the hearts of the lovers of Imam went to the shrine of Imam al-Rida (a.s) in the shadow of tears of joy.