HomeNewsICEL NewsThe Hawza Ilmiyya of England’s additional measures to prepare lecturers for the... 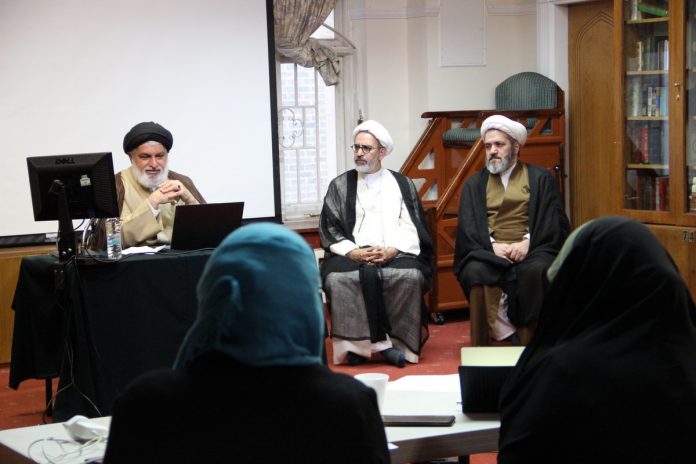 Hujjat al-Islam wal-Muslimin Seyed Hashem Moosavi, senior lecturer of the Hawza Ilmiyya of England, referred to launching a teacher training course in London. He also announced the efforts to attract talented students and establish specialised and intensive courses to train teachers in some of the required disciplines of seminary sciences for the next academic year.

He stated that the seminary’s deputy department of education intends to launch additional training courses next year for those graduates of the seminaries of Qom or Najaf. They have been engaged in Tabligh (the Islamic Missiology) in this country for a long time. This decision would help maintain their connection with the seminary and improve their knowledge.

He also thanked all who helped establish and launch this training course, especially lecturers and students who were seriously engaged in teaching and learning the knowledge of the Ahl al-Bayt (a.s) in this course. He expressed his hope that with double efforts, we will all see a further improvement in the quantity and quality of this course next year.

At the ceremony, which was attended by the head, deputies and several seminary lecturers, HIWM Saeed Sobhani, the coordinator of this training course, stated that: the first academic year of the seminary began on November 8, 2021, and Ended on June 15, 2022.

He added: In the 27 academic weeks of this course, students participated in classes three days a week (Mondays, Tuesdays, and Wednesdays) from 5 to 8 pm in-person and online.

According to Dr Sobhani, al-Makasib, which is the book of Sheikh Ansari on jurisprudence, and al-Wasit, which is the book of Ayatollah Sobhani on the principles of jurisprudence, as well as the al-Nahayat al-Hekmah and Kashf al-Morad in philosophy and theology, are among the texts that were taught in this course. In addition to continuing the topics of the above books, new theological topics such as epistemology, pluralism, and hermeneutics will be introduced in the next academic year.

In this ceremony, the students expressed their opinions regarding this training course.