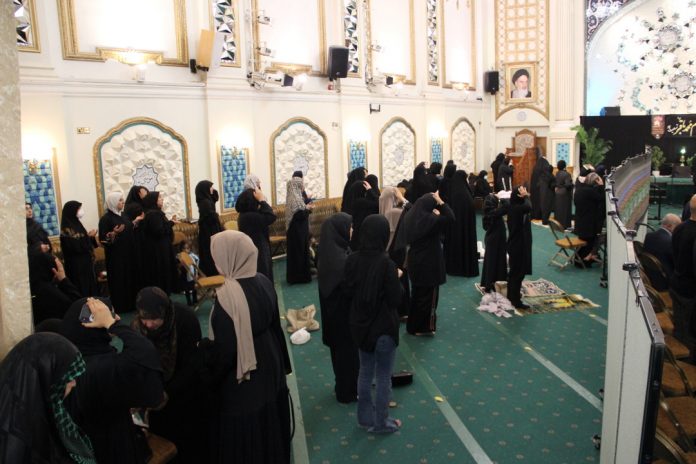 The ceremony commemorating the martyrdom of Imam Muhammad Baqir (AS) was held in three languages in the presence of the mourners of the Ahl ol-Bayt (peace be upon them) at the Islamic Centre of England.
In this ceremony, which was held on Thursday 7th of July 2022, with the presence of lovers of the Ahl ol-Bayt (peace be upon them), HIWM Jalali talked in Arabic that: Human actions are divided into two types, individual and social as well as human relationships with the Imam of their time is also like this.
He said in the continuation of his speech referring to the daily challenges of the people, especially the young generation in their personal lives that: The relationship of the youth should be strong and dynamic with the Imam of their time, so that they can be saved from a life without purpose. Referring to the importance of social relations, HIWM Jalali added that: the collective relationship with the Imam of the time is also important and this importance is tied to the gathering of people, which means that the society itself should also have a social relationship with the Imam of the time.

In the English section, HIWM Afzal Mirali stated about the life and character of Imam Muhammad Baqir (AS) that: Imamate of Imam Muhammad Baqir (AS) became familiar with science because the internal problems of the Marwanites provided an opportunity for Imam Baqir (AS) to spread knowledge among the Shiites that the enemy became the cause of good. He added: Shiites have grown and gained a lot of knowledge because of the scientific efforts of Imam Baqir (AS) and this Imam spread love for Ahl al-Bayt (PBUT) and also knowledge among Shiites.

HIWM Jafari, the third speaker of the ceremony in the Farsi section, spoke about the era before the reappearance of Imam of the time (AS). He said: According to a narration from Imam Muhammad Baqir (AS) before his reappearance, a group from the East rose up to demand their right until the reappearance of Imam maintains that their dead are considered as martyrs in the war.
He pointed to the closeness of the evidences of the Islamic Revolution of Iran and the uprising of Imam Khomeini (RA) and said: InshaAllah, based on this narration we hope that the Islamic Revolution of Iran will be connected to the emergence of the Imam Mahdi (AJ).
HIWM Jafari said: Adhering to the principles of belief and maintaining faith is one of the signs of a person’s character and one of the difficulties of the end of time is maintaining faith because maintaining religion in this era, which is the end of time, is like holding a molten coal in one’s hand and the people pure enter the furnaces of testing in the pre-emergence era and emerge from this harsh divine test proud.