Eid al-Adha Prayer at the Islamic Centre of England 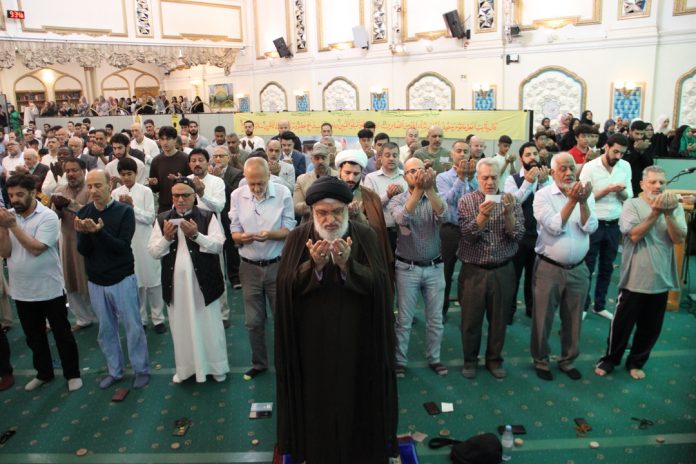 Eid al-Adha prayer was led by HIWM Seyed Hashem Moosavi; the director of the Islamic Centre of England.

In this ceremony which was held on the 10th of July 2022 at the Islamic Centre of England, hundreds of worshipers from different nationalities gathered together to show their obedience to Allah SWT.

In the sermons of the prayer, the director of the Islamic Centre of England spoke about the value and the purpose of sacrifice and the role of Islamic countries in the management of sacrificial meat. He also indicated to the martyrdom anniversary of Hazrat Muslim bin Aqeel Alayhessalam which was on the day of Arafeh.

He stated in the first sermon about the value of sacrifice and said that according to the verses of the Holy Quran, sacrifice is associated with the “Kaaba” and the “sacred months” and this is a means for the people to be dynamic and to protect the society from corruption and destruction.

He referred to the sayings of Imam Ali Alayhessalam about the value of the sacrifice and said: “If people knew the benefits and blessings of sacrifice, they would certainly have borrowed money to be able to sacrifice, because when the first drop of the sacrifice’s blood is shed on the ground, the sins of the owner of that sacrifice will be forgiven.”

The director of the Islamic Centre of England also mentioned the clear purpose of the sacrifice to be feeding the needy and poor people according to the Holy Quran. He also considered the purpose of sacrifice to be the perfection of monotheism and piety and added: “The true monotheism means that all resources should be consumed without any doubt and with pure intentions for any purpose that Allah has ordered to it.”

HIWM Moosavi pointed out in the second sermon of the prayer to the importance of the role and duty of the Islamic governments in the management of the sacrificial meat. He said, Imam Sadiq Alayhessalam says regarding this issue that: “ The reason why we used to forbid people from moving the sacrificial meat from the Mina was because of the population there and the lack of food for them. Now that the meat is more than people’s need, it is permissible to take it out of the Mina. Therefore, from the Islamic perspective, the sacrificial meat should provide food for Muslims and must simplify and develop the livelihood for the poor people in the society.

He continued the second sermon by mentioning the tragedy of the martyrdom of Hazrat Muslim bin Aqeel on the 9th of Dhu al-Hijjah year 60 AH in the city of Kufa and clarified: “Imam Sadiq Alayhessalam says about Hazrat Muslim that, all the attributes of Hazrat Abbas existed in Hazrat Muslim Alayhemossalam.

The worshipers participating in the Eid al-Adha prayer at the Islamic Centre of England showed a beautiful display of love and unity among the lovers of the Ahl al-Bayt Alayhemossalam by embracing each other before and after the prayer.