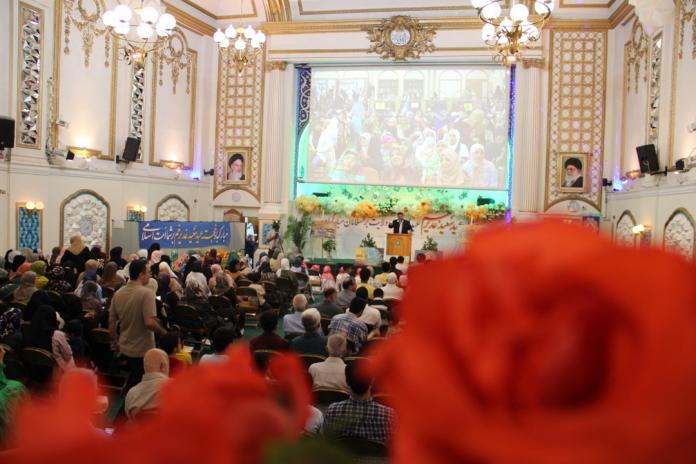 On the occasion of Eid al-Ghadeer, the young children chanted the song of Salam my Mawla in English to pledge allegiance with the Commander of the Faithful; Imam Ali (PBUH) at the Islamic Centre of England.

This beautiful song was performed for the first time in London at the glorious celebration of guardianship (Wilaya), which was held on the evening of Monday, the 18th of July, at the Islamic Centre of England with the presence of boys and girls from different nationalities, and the lovely manifestations of love for Imam Mahdi AJ enlightened the participants in the event.

During the celebration of Eid al-Ghadeer, various programmes, including nasheeds, performances of Ghadeer event by the Ghadeer Youth Theatre Group, poetry recitations, children’s entertainment and lectures in three languages made this ceremony one of the most attractive programmes of its type.

HIWM Seyed Hashem Moosavi, the director of the Islamic Centre of England, who delivered his speech in English and Farsi said: “We have two essential duties towards Ghadeer: We must convey the message of Ghadeer and we should have no fear from the blaming of those who blame.”

He called the purpose of celebrating Ghadeer to be increasing the knowledge of the young generation about Imam Mahdi AJ and considered this goal to be fulfilled by encouraging the youngsters to love Imam Mahdi AJ the way butterflies love the candle and fly around it.

HIWM Moosavi emphasized on the importance of celebrating the Eid of Ghadeer Khum and providing food for the believers on this occasion and added: “One of the requirements of celebrating Ghadeer is trying not to leave Imam Mahdi AJ alone in our time and this is the practical manifestation of Ghadeer.”

In this ceremony, Sheikh Hasan Al-Turaiki who delivered his lecture in Arabic indicated to the confession of a Jewish scholar about the truthfulness of Ghadeer Khum event and added: “The Ghadeer Khum event is one of the most important events in Islam because on this day the religion of Islam was completed.”

Sheikh Tariki clarified: “Eid al-Fitr came after Ramadan, which is the month of worship, and became influential; Eid al-Adha became important because it came after Hajj, but Eid al-Ghadeer came and completed the religion, that’s why it is the most significant Eid.”