HomeNewsSpecial NewsThe Mourning Ceremony of the Master of the Martyrs (AS) at the... 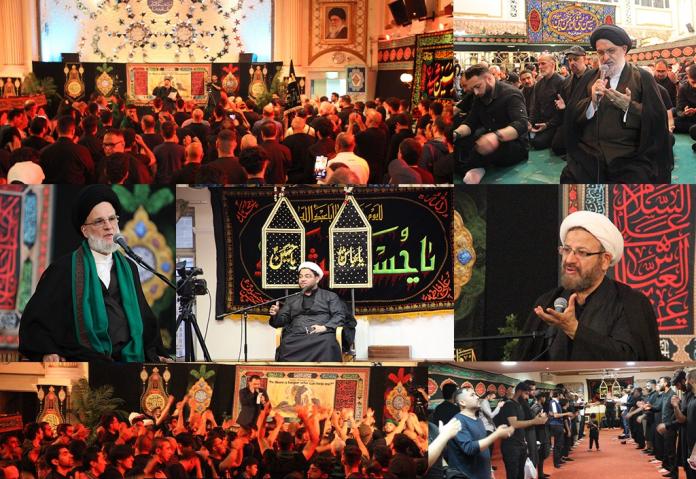 The Islamic Centre of England once again hosts the lovers of Aba Abdillah al-Hussein (AS) from different nationalities in order to demonstrate their love and devotion to Ahl al-Bayt (AS).
In these mourning ceremonies, the followers of Ahl al-Bayt (AS) living in London from different nations such as Iran, Lebanon, Iraq, Syria, Saudi Arabia, Kuwait, Afghanistan, Pakistan, Bangladesh, India, Azerbaijan, Turkey and England come to the Islamic Centre of England every night to form a united nation by participating in the Majalis of mourning for Imam Hussein (AS).

During the mourning ceremony of Aba Abdullah al-Hussein (a.s.) on the first to fifth nights of Muharram this year, HIWM, Ahmad Vaezi, as the speaker of the Persian section, referred to the virtues of the Ahl al-Bayt (AS) and said: “Mourning ceremonies for Imam Hussain (AS) are important because the leadership and guardianship are important.” In his speeches, he introduced the life of the purified Imams, peace be upon them, and added: “The verses of the Qur’an and Nahj al-Balagha have clearly defined the correct lifestyle and the way to achieve salvation, and one of the outstanding characteristics of Imam Hussein (AS) was his wholehearted courage and resistance against oppression.”

In the Urdu programmes at the Islamic Centre of England, which are held before the Maghrib Adhan, Sheikh Noor Al-Hasan, in a speech describing the outstanding characteristics of the companions of Imam Hussain (AS), said: “Saying Labbaik Ya Hussain and acting on them are two different things; because many Shiites say Labbaik Ya Hussain, but they don’t act upon it.” He also added that the character of the companions of Imam Hussain (AS) was practicing Labbaik Ya Hussein by sacrificing themselves for the sake of Allah SWT, and said: “Practicing Labbaik Ya Hussein is not saying it; one must express it by to acting upon it, which requires a wholehearted belief from the believer to be able to sacrifice himself for the religion of God.”
In the Arabic Programmes, held at the same time with Urdu Majlis in the main hall of the Islamic Centre before the Maghrib Adhan, HIWM Seyyed Ali Hosseini said in a speech, referring to the complexity of the concept of religion, that the presence and participation of young people in religious gatherings is essential and staying connected to Ahl al-Bayt (AS) will improve the hereafter, which will also provide a better world.
He also mentioned the adherence to Ahl al-Bayt (peace be upon them) as one of the outstanding characteristics of Shiite Islam and said: “The lesson we learn from the Ashura movement is that if we are on the right path, then fear of death has no meaning.”
In the English programmes held by the cooperation of the Ahlul Bayt Islamic Mission, which are held at the Mohammadi Trust, HI Seyyed Abbas Ayleya delivers lectures. In the first nights of Muharram, he elaborated the concept of guardianship, and in the following nights, he explained about the position of the Imamate and the outstanding characteristics of the Imam Hussein’s (AS) companions.
In all the programmes in different languages, the reciters add more spirituality to the atmosphere of the congregation by reciting eulogies and poetries, praising the patience of the household of the Prophet SAWA in tolerating the hardships and calamities imposed on them in the tragedy of Karbala.
The attendance of the youngsters in these programmes at the Islamic Centre of England this year is very impressive compared to previous years.

Special Programmes on Ashura Day at the Islamic Centre of England