HomeNewsSpecial NewsThe Strategy of the Infallible Imams (AS) in keeping the Ashura Uprising... 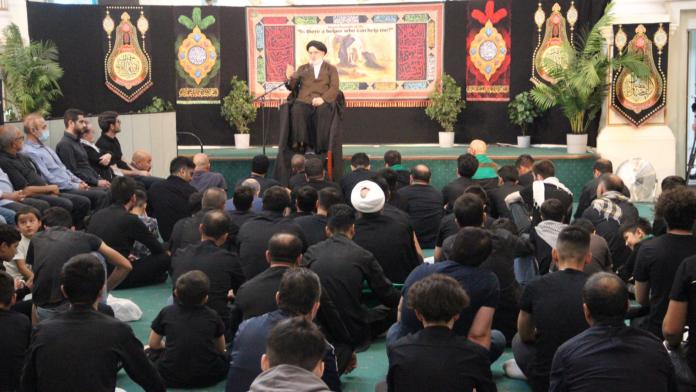 HIWM Seyed Hashem Moosavi, director of the Islamic Centre of England, on the 6th and 7th nights of Muharram 2022, recalled the tragedy of Karbala at the Islamic Centre of England, as a consequence of forgetting the event of Ghadir. The director mentioned, “Despite all the limitations faced by the infallible Imams AS, their strategy was to keep the uprising of Karbala alive even many years after this tragedy. If there was no day of Ashura, the true and pure Islam would have been forgotten.”

During the Farsi mourning ceremony at the Centre on the 6th night of Muharram, HIWM Seyed Hashem Moosavi, clarified the reasons as to the persistence of the Karbala movement saying, “Despite the fact that the tragedy of Karbala took place across only a small stretch of land, over a short period of time, and sacrificing relatively few people, it became a great and everlasting revolution. This persistence is rooted in several factors including the position and character of Imam Hussein (AS) as the son of the Prophet SAWA, as well as his sincerity and method of confrontation.”

HIWM Seyed Hashem Moosavi, however, considered that the most important factor in the persistence of the uprising of Hazrat Aba Abdillah AS even after the event of Ashura, was the manner in which the holy Imams AS insisted verbally and practically on the mourning ceremonies in commemorating the martyrdom of Imam Hussein (AS) for all times.

Referring to the reason as to why the infallible Imams AS emphasized on keeping the movement of Karbala alive, HIWM Seyed Hashem Moosavi mentioned that the incident of Karbala is a consequence of forgetting the event of Ghadir, and, had the sacrifice of Aba Abdillah AS in Karbala also been forgotten, we would definitely have witnessed further unfortunate incidents, one of which is a delay in the reappearance of Imam Mahdi AJTF.

HIWM Seyed Hashem Moosavi went on to advise those who mourn for Seyyed al-Shohada AS, to pay due attention to the fact that true mourning depends upon having proper knowledge of the goals of the tragedy of Karbala and also knowing the character of the companions of the Imam AS. He said mourning is only useful when it is performed through proper knowledge.

The director of the Islamic Centre of England, further emphasized this point saying that the Ashura uprising can be represented into three groups of people who directly played a role on Ashura: white (representing truth), black (representing falsehood) and grey (representing those on neither side). It is essential to pay attention to the characteristics of each of these groups in order to determine our position regarding the tragedy of Ashura. One can then determine who belongs to; the right or wrong path, or thirdly, a path where one is indifferent to truth or falsehood based on the incidents happened in the tragedy of Ashura.

Special Programmes on Ashura Day at the Islamic Centre of England