HomeNewsSpecial NewsThe two characteristics for the companionship of our awaited Imam 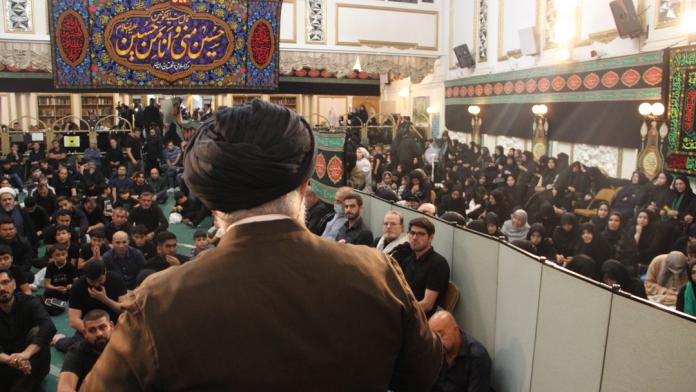 On the eve of Ahura, the director of the Islamic Centre of England stated that the essential characteristic of those people who were qualified to become martyred in the companionship of Imam Hussain (a.s) was loyalty to their pledge with the Imam of their time. This trait distinguishes them from other members of their society.
HIWM Seyed Hashem Moosavi emphasising the significance of insight among elites, continued: during the life of Imam Hussain (a.s) in Karbala, numerous elites slipped. At the same time, some people apparently from the lower classes of society succeeded.
The lecturer of this event, by stating that we can please our awaited Imam by showing our loyalty, added that: [The tragedy of] Karbala was the consequences of revoking those people who pledged [on the event of] Ghadir. If the promisors of Ghadir had followed through with their pledge, The Saqifa of the Banu Sa’ida and then [the tragedy of] Karbala would not have happened.
The Islamic Centre of England’s director added that: amongst the loyal companions of Imam Hussain (a.s), the main concern was to keep their promises to the Imam of their time. They defended Imam Hussain (a.s) until their very last breath, and still, they were worrying either have they fulfilled their pledge or not.
On the Ashura evening (Sham-e Ghariban), HIWM Seyed Hashem Moosavi said: Muharram’s [leading] lesson is not to leave any Imam alone or suppressed.
He pointed to loyalty as the most crucial characteristic of the companions of Imam Hussain (a.s), which was explained on the night of Ashura. The second characteristic of the companions of Imam Hussain (a.s) that caused them to sacrifice their lives for the Imam of their time was a deep belief and belief in the words of the infallible person.
HIWM Moosavi said: companionship with the Imam of our time also requires the presence of these qualities in his companions and disciples. Fortunately, during the Iranian Islamic Revolution, we have witnessed the manifestation of this profound thinking in a way that, in the wills of many martyrs of Iran’s Islamic Revolution since the imposed war until now, these traits have been fully expressed.