HomeNewsSpecial NewsCommemoration for the Arbaeen of Imam Hussain (a.s.) at the Islamic Centre... 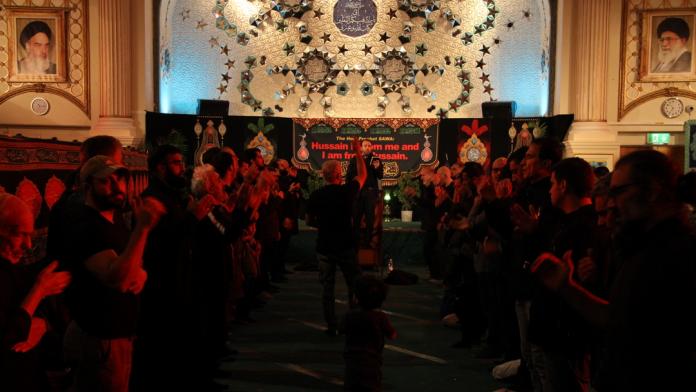 To commemorate the fortieth day, Arbaeen, of the martyrdom of the Master of the Martyrs, Aba-Abdillah Al-Hussain (a.s.), a a mourning programme was held at the Islamic Centre of England. The programme was held in three languages on the eve of Arbaeen, Thursday 16th of September 2022, and was attended by many lovers of the Ahlubayt (a.s.). HIWM Sayid Ali Al-Sa’bari, in Arabic, after speaking about the philosophy of commemorating Arbaeen said, “Lady Zainab (s.a.) stood up in the court of Yazid (l.a.) and exposed his oppression which shows her free spirit, resistance and continuing the path of Imam Hussain (a.s.).” HIWM Sheikh Ahmed Haneef continued the programme in English saying, “Enjoining good and forbidding evil is one of the lessons of the event of Karbala. If today each one of us acts upon this obligatory action, then we are followers of Karbala and not one of those who have been left behind from the Arbaeen (walk).” In the Farsi part of the programme, HIWM Sheikh Subhani said in his speech, “One of the Islamic traditions is (commemorating) the fortieth of the master and leader of the martyrs, Imam Hussain (a.s.) and his companions. According to the Holy Qur’an, people reach perfection and maturity at forty years.” He continued, “The aim for holding commemorative programmes on the fortieth, is to remember and appreciate the sacrifice of Imam Hussain (a.s.) and his companions. Walking and gathering people in Karbala on the day of Arbaeen shows the truth of Lady Zainab’s speech in the court of Yazid (l.a). In the court of Yazid (l.a) she said, ‘Oh Yazid (l.a.)! You cannot extinguish the light of Imam Hussain (a.s.).’ Today we can see the truth of these words when we see programmes held for Arbaeen which are symbolic of this love for Imam Hussain (a.s.) and also the pilgrims pulled towards Imam Hussain (a.s.)’s shrine in Karbala. All of this actually means we are saying, ‘Oh my Imam! Even though we were not with you in Karbala that day, today we show our love towards you.’ ” Eulogies were recited in Arabic and Farsi for the martyrs of Karbala and for Lady Zainab (s.a.)’s suffering in the aftermath of Ashura. Separate cultural and educational classes were held for children and youth to familiarise them with Arbaeen.